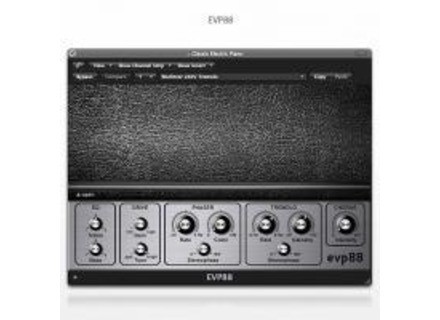 View other reviews for this product:
I have been using EVP 88 in logic pro for a while now. I actually stumbled upon this vst plug in when I was just going through some extra stuff in logic. I have never heard or even thought of using this if I didn’t just stumble across it while just going through some older vst and vst’s that I havent used. I don’t use logic as much as I use to anymore so when I when back into logic and started looking around I was very happy when I found EVP 88.

I have been using this on my mac book with logic 9 I think that’s the version that I have been using it on. It could be 8 though. But either way it runs great and it sounds great. Its actually pretty cool to have something that sounds this good come with your sequencing software. I almost which I could get this to work on my pc. It works great with Logic though and never had a single issue with its performance or getting it to load up. I don’t know about installing it because it was already installed with logic so I never had the chance to go through that. Like I said I never even knew what it was till I stumbled across it. I still do use it from time to time whenever I am working logic on my mac book.

Overall, it seems to be very good. I didn’t have to pay for it so that’s a plus. Im not sure if its on everyones Logic or if you can even purchase it separate or what the price of it is. I am just thankful that I got a vst that is this good already installed with logic. I love having good electric pianos on hand at all times. This is one of the better ones that I have used with Logic on my mac. I have some really good ones on my windows system so im thankful to have a really good one that’s exclusively for mac computers.