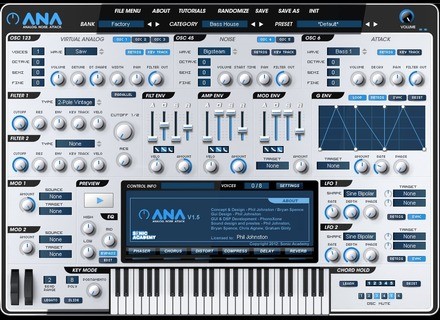 Sonic Academy Ana synth has a lot of great features.
It has 3 main osc, a nice build-in attack and noise volume control.
It really makes the sounds much deeper in frequency ranges.
Basically Ana is a new type of synth similar to one of the most used synth on the market called sylenth1.
The great thing about Ana is that it has 13 filters that are completely different,and also some great effects that you can engage in your mixes.

The sound editing is relatively easy because all the osc, modulators are well built-in, and is makes pretty easy to build a nice sound from scratch.
The configuration is also available for almost every music producers.

The sounds are analog based but also with a touch of modern type of synth.
The expressiveness of the sounds is beyond good, even without a compressor or eq you still have a rich nice sound and also very clear.

The effects gives the owner of the program a lot of possibilities and tweaking, I really do enjoy this aspect of Ana. I like pulse sound waves,and saw waves provided by Ana.

What I love most about ana is the high quality provided by it.

I use Ana to create some deep basslines, or some wobbelling dubstep type of bass that sound really great.
The price is so great, it costs only around 80 dollars, it's really worth the money.
I've tried many complex synths but this great synth provides something completely new, the chord hold feature really helps me to build some nice chord progression, basically by just learning a chord, afterwards you just press a key and you have the learned chord. That way the music flow goes much easier.
The precision and quality of the sounds is remarkable, for it's price it's just mind blowing, if you're trying to put a new spin on your tracks you should totally try this program out.
Without a doubt I would go again and again with sonic academy's ana.
Did you find this review helpful?yesno
Cookies help us improve performance, enhance user experience and deliver our services. By using our services, you agree to our use of cookies. Find out more.