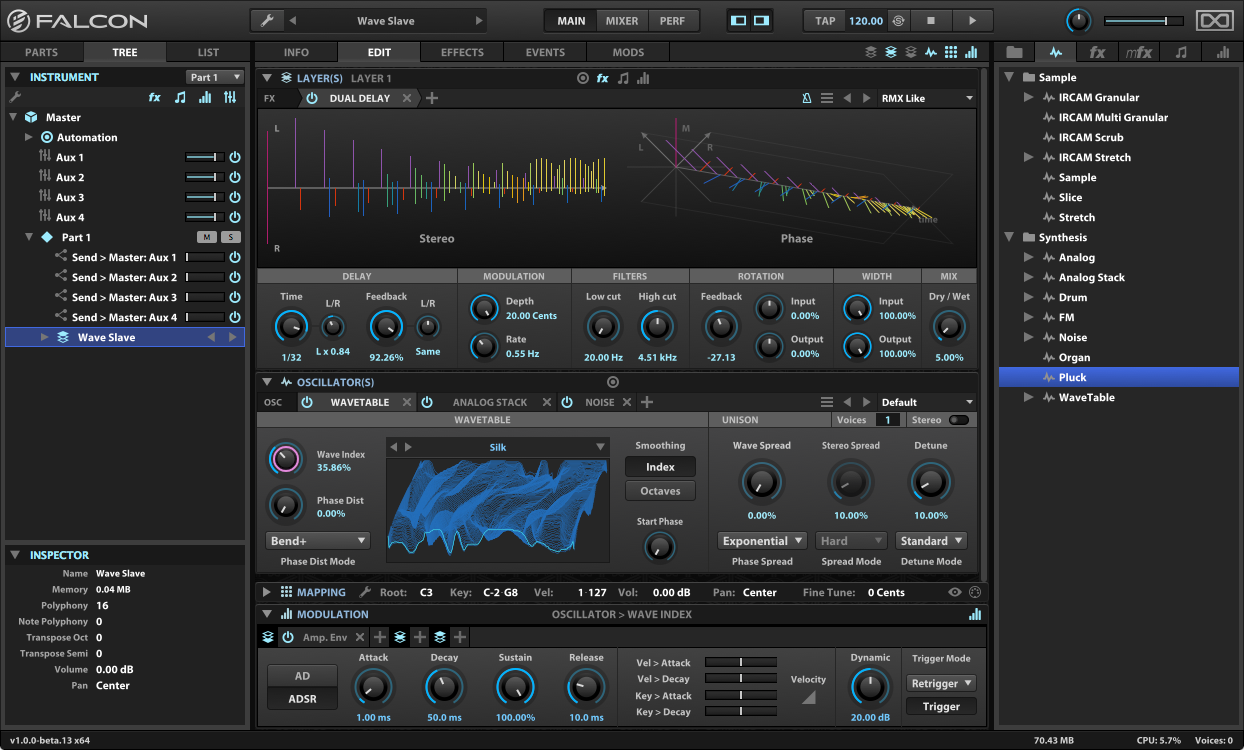 Product replaced by the UVI Falcon 2.

- my personal opinion:
After using it for 2 weeks, I can already have fun recreating the sounds of a lot of my synths, which is quite impressive. The interface requires a certain time to get used to it (unless you’re already used to Machfive 3 I guess since both seem to have a lot in common), but once you got the basics it turns out to be very well conceived. After tweaking here and there, I now have the feeling that half my other synths are actually 1:20 scale Falcons.
Soundwise: it really sounds good and allows to get into a very large number of styles, no reproach to be made here. Its wide array of effects, modulations and MIDI FX even add to its versatility… I’m even leaving other plugins aside and start to consider uninstalling some of them.

Pros :
- the concept (simply great, kudos !)
- very high quality sound and effects (even if some of them seem to resemble each other too much and would deserve to be turned into a single effect with different selectable modes)
- the possibilities opened by the modular conception
- excellent sampling, both for its quality and integration
- endlessly expandable with the additional soundbanks (some already released, others to come)
- well-conceived interface and workflow (yet I can’t see the point of parts containing 1 program, why not 1 program/part which would include all layers?)
- the GUI: very clean and eye-pleasing – which deserves being mentioned
- great fun to use (an important point indeed…)
- documents and video tutorials are well done (let’s just hope the series will develop so as to really cover all functions in the end)
- stability (perhaps a little early to draw conclusions, but I encountered no problem so far except for the audio engine that stops after OSX activated the standby mode (version 1.0.0 in standalone).

Cons:
- the drum oscillator is less convincing to my taste
- some effects alter the volume way too much
- the price may be a bit high for some (BUT it’s to be relativized considering its capacities and the $100 voucher it comes with, it really is worth its price)
- no demo version (even if it’s possible to have a detailed look at it through the docs and videos, it may not be enough for some)

What I’d love in the future:
- similar effects being grouped with a “mode” menu, so as to switch between variations. This would make the workflow cleaner and Falcon even more coherent (of course it’s always good to be able to boast having tons of thousands effects, and such a move would reduce that number)
- an FM oscillator as complete as the FM8’s
- resizable faders in “Mixer” mode
- ...it being featured in a special editorial review on Audiofanzine?

*Please note that my config includes a rather quick SSD, so I can’t judge the starting or loading times on an HDD, I’d be curious to know how it works on other configs.

Overall, I’m a very satisfied user and I’m glad I have this virtual instrument. I hope I’ve been neutral and clear enough in this review – my first on Audiofanzine.
00