A review of the Alesis DM Dock drum interface 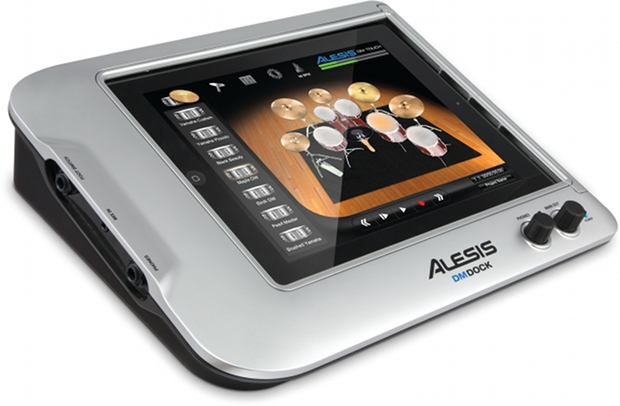 Following in the footsteps of its I/O Dock, which provided iPad musicians with a fully featured audio and MIDI interface with a docking slot, Alesis has released the DM Dock. Aimed at iPad drummers and percussionists, it’s an iOS and Mac/PC MIDI interface featuring 13 1/4” trigger inputs. It allows electronic drummers to access drum and percussion sounds from iPad apps or Mac/PC apps.

Like the I/O Dock, the DM Dock features a main center section that your iPad fits into. It even has a handy, hinged side panel that makes it easy to slide your iPad into the dock. The DM Dock supports the iPad 4th generation, 3rd generation, and iPad 2. If you have an iPad Air or iPad Air 2, the two latest models, you’ll be able to connect to the DM Dock (which offers a Lightning connector as well a 30-pin connector), but it won’t be securely held in place because those two have smaller dimensions than the other iPads. If you have an original iPad, it will be too big.

I asked Alesis about this and was told, “While there are no current plans for an adapter for newer iOS devices, users have made very simple modifications to their DM Dock by using velcro, foam, or other materials to help keep their newer generation iOS devices safe and secure.”

The top of the DM Dock is angled, which makes viewing your docked iPad easier. The top panel has two volume knobs, one that controls the Main 1/4” outputs on the back, and the other governs the 1/4” TRS headphone jack on the left side of the unit. Most of the I/O resides on the back, including MIDI In and Out, and 13 1/4” trigger inputs, each routed to a particular drum or cymbal (based on the GM drum map), both on an attached iPad or via the MIDI out jack.

The trigger inputs support dual zone drum pads, triple-zone ride and multi-choke cymbal pads, as well as acoustic drum triggers. Also on the back panel are the aforementioned main outputs, MIDI in and Out jacks, a USB MIDI connector and the input for the included 6V DC adapter. The power button is just to the left of the adapter input. With its power on, the DM Dock will charge any connected iPad, which is great. Also residing on the left side of the DM Dock is a footswitch input for connecting an optional switch to send on/off Control Change messages.

As a sound engine, it features 10 different kits, ranging from a jazz to rock to electronic to percussion. You can customize the kits by dragging and dropping elements from any of them onto the active kit. All the sounds are tunable, and can be mixed for volume and panning, and sweetened with reverb (each drum or cymbal has its own reverb send, but all must share the same reverb preset.)

The sounds in DM Touch come from SONiVOX, and are clean, crisp and generally quite useful, although not particularly inspiring. You’re not limited to using them, of course, as you can trigger sounds in Core MIDI apps, as well.

You can use Inter-App audio to get DM Touch sounds into iOS DAWs. I was able successfully use the DM Dock/DM Touch combination with GarageBand for iOS, and with Harmonicdog’s Multitrack DAW. However, with Steinberg Cubasis, I couldn’t get DM Touch to show up as an Inter-App Audio instrument; and DM Touch crashed virtually every time I tried to connect it to WaveMachine Labs Auria via Inter-App audio. DM Touch doesn’t support Audiobus, so your options are somewhat limited for iOS recording.

Another key aspect of DM Touch is its ability to tweak the trigger inputs to best suit your kit and your playing style. You can adjust a variety of parameters for each trigger including Velocity Sensitivity, MIDI receive note, Threshold, Velocity Curve, Xtalk Receive, Xtalk Send. A virtual switch lets you choose between Piezo, which would be the setting for a standard trigger pad; and Switch, which is for cymbals that have “choke” functions triggered by footswitches.

The DM Dock definitely offers a lot of flexibility. In addition to connecting it to your iPad and triggering the DM touch samples or sounds on other apps, it also functions as a MIDI interface to connect your electronic kit or pad unit for triggering sounds on your computer. You can plug it into your computer via USB MIDI or by connecting its MIDI out into another interface’s MIDI in.

Latency is obviously an issue that can sink any drum or percussion interface. If there’s a noticeable delay between when you hit a drum pad and when the note sounds, it can throw you off and make it harder to stay locked in rhythmically.

I encountered the most latency when triggering iOS sounds (I also noticed similar latency when triggering sounds from the GarageBand app), the second most when going through the DM Dock’s USB MIDI port to drive MIDI drum sounds in Ableton Live, and the least when going directly from the Samplepad into my MIDI interface and into Live, with the DM Dock out of the picture. While there wasn’t enough latency in the worst of those scenarios to make the system unusable, it was noticeable enough that it might make it hard for some drummers to lock in to the beat.

The big innovation for the DM Dock ($249) is that it lets you connect electronic kits to your iOS setups. Alesis correctly points out that this will open up sonic possibilities for live-performing drummers, as they will be able to use Core MIDI apps on their iPads as sound sources. On its web site, Alesis say that the DM Dock lets you, “Quickly change and enhance your drum kit at a moment’s notice; switch to a new snare drum or ride cymbal to suit a venue; apply reverb to suit a particular room’s acoustics; or even create an entirely new kit to suit a last-minute gig.”

The problem with this concept, in my estimation, is that anyone with an electronic kit already has a drum brain, which isn’t any less convenient to carry to a gig than the DM Dock, plus it will likely trigger with less latency, because you’re not going through iOS. Given those factors, unless you’re terribly sick of the sounds you already have, I’m not sure what would motivate you to get the DM Dock for a live performance rig.

I can see it more for those who want to record into iOS DAWs with electronic drums. But again, your electronic kit’s brain will already have trigger inputs, and you could connect your drum brain’s MIDI out into a standard iOS MIDI interface, and play Core MIDI iOS drum instruments that way.

I was enthusiastic when I reviewed the Alesis’s I/O Dock 2, an all-in-one audio/MIDI interface, because it provided the necessary connections for musicians to record and produce on their iPads. While the DM Dock gives electronic drummers an easy way to tap into the many sounds available in iOS, neither the system as a whole, nor the end result, is as satisfying.