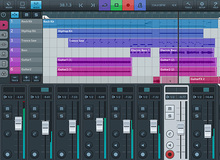 Getting Into Inter-App Audio

Make Music With Multiple Apps on your iPad, iPhone, or iPod touch
By Mike Levine on 07/07/2014

Introduced with iOS 7 and available on all iOS devices, Apple’s inter-app audio feature allows compatible apps to share audio streams and MIDI with each other, making it possible to work with multiple apps in a relatively seamless manner. Let’s take a look at how to use it.

In Inter-App audio, there are two types of apps: Nodes, are Instrument and effect apps whose outputs are made available to other apps. A Host is an app (usually a recorder or DAW) whose input is made available to the Nodes.

One of the confusing aspects of Inter-App audio, as opposed to Audiobus, which is a third-party option for audio integration among apps, is that every app implements it a little differently, which can sometimes be confusing. For example, Inter-App audio transport controls appear on all Node apps, and are typically right on the main screen, but on Arturia’s iMini app (a superb Minimoog emulation), I couldn’t find them until I tapped a disclosure arrow entitled Connect, which revealed them.

Here's a step-by-step look at at configuring an Inter-App Audio setup, using Apple GarageBand (free in iOS 7) as a host, and Tempo Rubato's NLog Synth Pro as an instrument Node.

Inter-App Audio can be implemented in compatible MIDI apps, too. For example, the MIDI workstation app Tabletop includes an Inter-App Audio MIDI controller called Mastermind as one of the modular instruments that you can use within it. After you’ve added it to a setup, and opened it, you can choose an Inter-App Audio instrument in its Select App window, which can then be played from the onscreen keyboard, and its audio will be routed to Tabletop's mixer.

As you can see from those examples, Inter-App Audio is a powerful feature in Apple's iOS, and once even more apps become compatible, it will be even more so.