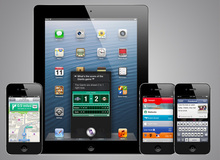 The quality and variety of synthesizers available for your iOS device just keeps getting better and better. Although many of the top, name-brand synths will cost you in the range of $20 or even more, there are some great ones on the iTunes Store for half or a quarter of that price. Here are five synths that range from free to $9.99, and offer a lot of synthesizer bang for the buck.

Arturia has been an industry leader in creating dead-on emulations of classic synths, and now they’ve released an iPad version of the MiniMoog. Based on the same technology they used for the Mini V for Mac and Windows. The iMini app is loaded with 500 sounds! It includes entire sound banks from such synth luminaries as Klaus Schulze of Tangerine Dream and Geoff Downes from Asia. What’s more, unlike some iOS instruments, the sound banks are very well organized, and broken up into different instrument types within each bank, which makes dialing up the sound you’re looking for a lot easier. And the sounds are so amazingly warm and analog sounding, you won’t believe they’re being created inside an iPad. 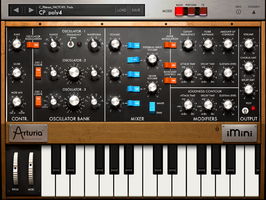 Controls on the main panel duplicate the original MiniMoog, so you can tweak the sounds to your heart’s delight, should you so choose. You can also save your creations, and Arturia also added an XY Pads for performance, chorus and delay effects, and more. The iMini would be a great deal at twice the price. 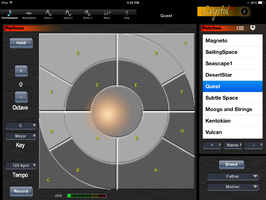 Crystal Synth XT produces cinematic-like evolving synth sounds of great complexity, which, on the iPad, are deeply editable. Every patch has three separate voices, each of which contains an oscillator, along with amplitude and filter envelopes, all with myriad editable parameters. The mixer window lets you add four separate delays and four separate reverb or filter effects. You can also “Breed” two patches together into a new sound, record parts, and trigger notes from a circular touchscreen or a virtual MIDI synth.

When opened on the iPhone or iPod Touch, the editing is much more limited, but you can still combine sounds. On all devices, you get five banks of sounds, giving you plenty of fodder for your "breeding" experiments. You play Crystal from a unique touchpad screen that can be set to a number of different modes including Major, Dorian, Phrygian, Chromatic and more. There’s no onscreen piano keyboard, but Crystal Synth XT responds to Virtual MIDI, so you can play it from the keyboard of a Virtual MIDI compatible app. 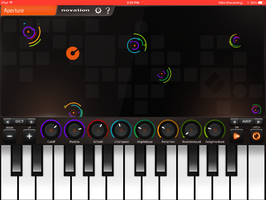 Novation designed the Launchkey app as a synth companion to its Launchkey and Launchkey Mini controllers, but you can use it with any MIDI controller. It gives you a nice selection of synth sounds, many with a lot of motion, thanks to the built in arpeggiator. There are some features that you’d need an actual Launchkey keyboard to access, including switching between performance modes and controlling certain parameters. However, I was using an M-Audio Ozonic connected through an Alesis iO Dock II, and I found that the first four control knobs and the last four control sliders on the Ozonic, in their default state, were precisely mapped to control the eight virtual parameter knobs in Launchkey. So even if your controller’s knobs or sliders aren’t correctly mapped at first, you could certainly set them up quickly enough.

Launchkey’s 80 sounds can be modified not only with the aforementioned knobs, but with several touchpad style knobs that float in a large open black field that takes up most of the upper part of the app’s window. Novation has another free app out called Launchpad, which is a trigger-pad-based remixing app, and you can sync Launchkey up with it so that, for instance, the arpeggiator is locked to the tempo of the drum part you’re using in Launchpad. It’s not clear how long Novation will keep the introductory price (or should I say, lack of price) for Launchkey, but if you want a pretty cool-sounding synth app for zero dollars, download it today. 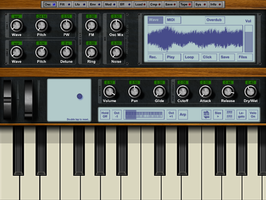 Whether you’re a synth geek or novice, NLog Synth Pro provides you with a powerful synth engine, tons of features, and lots of cool presets. Described by its developer as a “Virtual Analog Synth,” it offers 224 easily editable factory sounds. The synth offers four oscillators, two filters with seven filter choices in each, four ADSR envelope generators an XY Pad (great for altering a sound on the fly), pitch bend and modulation wheels, an arpeggiator, a multi-effects section and more. There’s even a recorder that lets you capture either audio or MIDI files, which can then be exported by email, Wi-Fi, or opened in a compatible app.

Between its deep sound engine, and support of Audiobus and Inter-App Audio, it’s a versatile powerhouse of a synth. NLog Synth Pro is iPad only, but iPhone and iPod touch users can purchase NLog MIDI Synth ($2.99), which is similar, but not as fully featured.

MorphWiz is an instrument designed by Dream Theater keyboardist Jordan Rudess, and was inspired by the Hakken Continuum Fingerboard, a MIDI synthesizer with a long touch-sensitive pad-like playing surface, instead of keys. MorphWiz offers a similar playing experience, with notes triggered by sliding or tapping your fingers on your iOS device's touchscreen. To the left the notes get lower, to the right higher, and you get colorful visual feedback under your finger as you play notes. Over 80 patches are included, all created by Rudess himself, and offering a huge range of sounds. 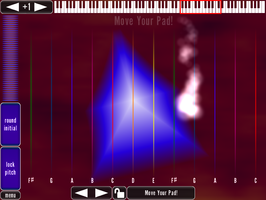 If you select the Menu button, you’ll find a large group of editable parameters. In addition to tweaking the sound, you can change the scale that the touchscreen will respond to. Not only does each patch have its own sound, but its own visual scheme. Despite its non-traditional interface, it's super easy to play, and requires zero keyboard skills. You can't play it from an external or virtual MIDI keyboard, because it doesn’t respond to MIDI. However, you can integrate it with other apps as an Audiobus instrument. As you would expect coming from Rudess, the sounds are killer.