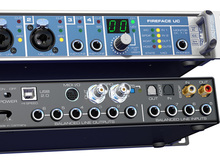 Studio in a Backpack — Part 1

Did you ever dream of a totally mobile studio, a compact setup that can fit in a backpack? A rig that you can carry with you virtually anywhere, and record and produce music, even where there's no AC power? Now, thanks to the audio capabilities of the Apple iPad, that dream is both achievable and affordable.

In this article, I’ll show you what you need to make a mobile studio like that a reality. Same as your computer studio, your iPad (or iPad mini) mobile setup will require some outboard hardware devices and accessories, which I’ll discuss here. Although I’ll mention some specific products as examples, this is not intended as a buyers’ guide. Instead, it’s a more generic look at the type of accessories you’ll need to assemble your portable rig.

The power of suggestion

When the first generation of iOS devices came out (the iPhone was released in 2007 and the iPad in 2010), music apps were quite novel (an onscreen piano keyboard, an animated robot synthesizer, etc.), and the 16-bit audio quality was okay, and a big problem was how to get audio into the device other than using the built-in mono mic, which had pretty limited fidelity.

Nowadays, 24-bit, 48 kHz quality is standard in the iPad world, and some audio interfaces allow even higher sampling rates. What’s more, you can record in stereo, or with two, three, four or more simultaneous inputs, given the right hardware and software combination.

Although the DAW apps for iPad typically have iPhone and iPod touch versions, screens on those devices are on small side for comfortably recording, editing, and mixing multitrack sessions. If you can live with that limitation, you could certainly setup a studio based on one of Apple's smaller devices, using many of the same accessories that we'll be describing in this article.

For that matter, you could also put together a mobile, battery-powered setup based around a laptop instead of an iOS device. But here we'll be focusing on an iPad/iPad mini studio, which offers a less expensive and smaller option to a laptop, and a different type of workflow due to its touchscreen interface.

The ins and outs

I’ll start with one of the key components of your studio: your audio interface. For ultimate portability, you’ll want one that’s bus powered — that is it gets its power from your iPad. That way, you can record without AC as long as the charge on your tablet holds out.

You’ll want an interface that supports XLR mic inputs for vocals and instrument miking, and 1/4” instrument inputs for directly connected (DI) guitars and basses. If you're going to be playing virtual instruments, you'll want MIDI support as well.

Using a class-compliant USB audio interface designed for use with a computer is another option. Most will work with an iPad via one of Apple’s adapters that convert the device’s dock connector to USB. Use the Apple Lightning to USB Camera Adapter ($29) for Lightning-equipped iPads (iPad 4th Generation and later), or the Apple iPad Camera Connection Kit ($29) for older iPads.

Not all USB audio interfaces can be bus powered from an iOS device, however, it depends on how much power they draw. That aside, going the adapter route opens up a lot more possibilities in the interface department. If you need more than two simultaneous inputs, a multi-input USB interface through an adapter may be the best way to go. Just be sure that your iOS recording app will support that many inputs at once.

In the next installment, I’ll look at other hardware you’ll need for your mobile studio, including keyboards, monitors and more.

Next article in this series:
Studio in a Backpack - Part 2 →