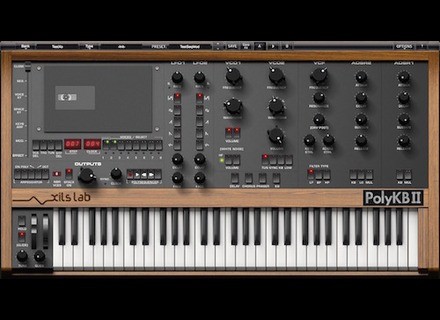 The PolyKB mk II is described as "a recreation of a very rare and very powerful polyphonic synthesizer released in the 80's."

PolyKB II captures the sound and spirit of the legendary RSF PolyKobol Analog synthesizer including a continuous morphing Oscillator, which can be modulated by many sources.

The PolyKB II is a polyphonic subtractive synthesizer based on two waveform morphing, aliasing free oscillators and a self oscillating 4 poles low pass filter. The oscillators take a large part of the sound of this synthesizer while the filter recreating a standard analog chip of the 80's (with the help of modulation sections), is designed to allow the PolyKB II to create warm sounds from basses to evolving pads, through "aggressive leads and thin crystal keyboards as well as a huge range of incredible special effects that sound designers will love to use..."

While PolyKB II retains the analogue characteristics of V1, the folks at XILS Lab have added features that were not available on yesteryear's classic hardware synths. PolyKB II now combines vintage and modern :

• Modulation has been enhanced in the three modulation matrices
• All can now have a negative value applied (V1 always being positive), while an additional "Velocity Control Mode" now allows a huge dynamic range, according to XILS-lab.
• A number of new modulation sources and targets have been added, including Monophonic LFOs (allowing Mono and Poly LFOs in the same patch)
• The implementation of a Time Multiplier system allows all envelope times to be multiplied by x2, x3, or x4 — with a click.
• Two new effects have been added — Phaser, plus a special Dual EQ, with a unique and musical-sounding Contour function.
• The Arpeggiator now includes a Polyphonic mode, as well as Gate and Swing parameters.
• The proprietary D-Myx Stereo XY Pad tool now benefits from two dynamic modes, allowing a controlled motion between the points with full visual control.
• The P-Myx Polyphony-controlled XY Modulation Pad can now send negative modulation amounts, allowing notes to sound different each time they're played.
• A Polyphonic Sequencer now has a magnification tool and shift step function.
• Responding to user feedback, PolyKB II benefits of an ergonomically and cosmetically-revamped GUI, viewable in three sizes (Small, Medium, and Large)
• 250 new hot patches now takes advantage of all these features — almost all new presets react to Mod Wheel.
• New patches will be available right after PolyKB II's release date.
* All owners of the previous version of PolyKB can upgrade to PolyKB II for FREE !!! The PolyKB II is available with the following formats :
• Mac OSX 10.3.9 and later : VST, Audio Unit, RTAS (Protools 7.0 and later)
• Windows XP, Vista and 7 ; VST, RTAS (Protools 7.0 and later)
• iLok or eLicenser authorizations are available
• Dongle free demos are from now on available