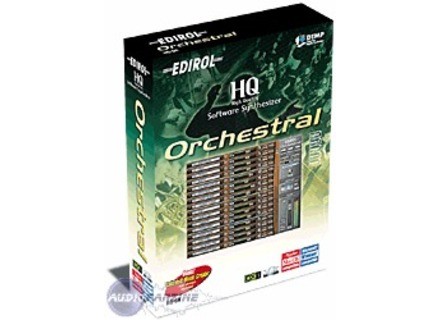 View other reviews for this product:
There weren't any kind of compatibility issues with Edirol Orchestral.
The manual provided by the soft is quite clear and enough to understand the basic functions of the work flow. However it has plenty of musical instruments and if you would like to have a better understanding of the connections between instruments and sounds you should search for some additional info.

The general configuration and setup is quite simple and fast, in just a couple of minutes you would have your own orchestra installed as a VST or standalone in your own home or studio.

The typical functions are quite accessible and clear , the design however is quite amateur but straight forward that's why it's pretty easy to use.

The software works decent and the gear is stable, however I've encountered a problem, after closing the daw, next time you open the project, the settings aren't saved, so all of your setting are practically lost.
I've been using this program for more than a year, and I gotta say, it's quite good, however it can't be compared with some massive orchestral like East West Quantum Leap or VSL.

What I like most about it, it's that it doesn't require high cpu resources, you can run multiple instances of Edirol and still work as you would've lunched just one.
The price of this product can match almost every kind of pocket, it doesn't cost much so practically anyone can afford it.
However I would suggest if you're serious about producing orchestral music, classical music, or just some pop involved with strings/ basses/ to get something that has a better quality.

The quality of sounds I would rate 7/10, the precision of instruments and pitch is good, 8/ 10.

Knowing what I know, if I wouldn't have enough cash to buy EWQL or something similar than I suggest getting Edirol Orchestral.