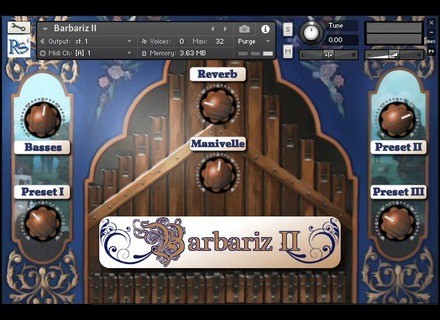 A follow-up to their first Barbariz barrel organ, Rossignol Studio's Barbariz II offers its own, different sounds defined as "a little rough".

The interface consists of six controls: four for organ sounds (a knob for bass notes C1 to B1 and three for other -preset- sounds over four octaves using keys C2 to G5), a reverb setting, and finally a knob (named "Manivelle" - that's French for "crank") that controls the crank level (which is itself playable using keys G0 to A0).

Announced as offering a wide range of barrel organ sound colors, this Kontakt virtual instrument is composed of samples in 24bit/96KHz quality created from a real 36-key crank organ.

Price is €15 and the library requires Kontakt 5. More details at Rossignol Studio's website.