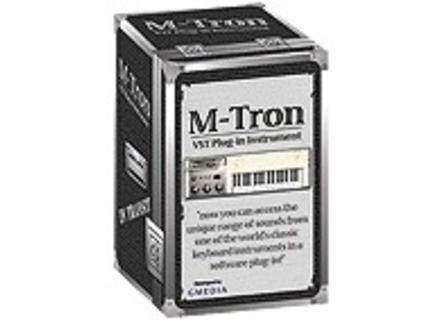 View other reviews for this product:
No problem installing Windows XP Pro with Cubase and a map VST5 Audiophile 24/96
The configuration gnrale fate was no problem, I did not even have to read the user manual while c'tait the very first time that I ' install and use a VSTi.
The manual that said, read later, but is concise enough.

PC Setup:
Pentium 4 1.7 Ght, 256 MB RAM memory
As Describes prcdemment, Xp Pro + Cubase + Audiophile 24/96 (PCI version) Configuration = no problem, everything works impcc, stable, with that said a few times when the volume is grsillements too strong, but it comes more than set up my card I think (4ms latency).

I use it for ending for a year, I am absolutely a fan of the mellotron that is on most of my albums cults particulirement fan of progressive music and group such as Genesis, Yes or King Crimson, I found thanks to M-Tron, the typical sound of the mellotron identifiable and if I still wanted.
Sounds that fascinate me most are the violins and choirs, reminiscent incredibly well Epitaph or other Starless King Crimson. Other sounds such as flutes (Recalling the Beatles to other groups of prog) and choirs (including a sound used by Richard Babieri of Gravity Eyelids Porcupine Tree In Absentia on, I understand that it works Gmedia On the relationship ... o ...) I like particulirement, really impressive. I am less convinced by the samples of rhythms that are less useful me.
Namely, there are two CDs, including the famous sound of the mellotron intro of Watcher Of The Skies Genesis. A discovering too ...

In short, for cheap, you end up with magical sounds, how to use sparingly, an incredible ism, thrills guaranteed ... I would do the same choice without hsiter unless in the meantime, it gives me a real mellotron