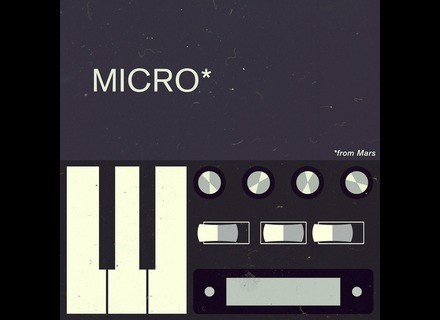 +
Samples From Mars Micro From Mars

Micro From Mars, Virtual subtractive synth from Samples From Mars.

Samples From Mars have released Micro From Mars, a samples rendition of a MicroMoog available in several formats.

A 1970s synth considered by some as seriously underrated, the MicroMoog is said to contain virtually the same filter as the original Minimoog. Samples From Mars goes as far as to claim its oscillators and filter have "more character than any modern Moog, including the Voyager", so it's only logical they were tempted to create an emulation of this aged, slightly unstable American VCO able to deliver powerful and rich sounds, and which they define as "capable of everything from thick and smooth to downright dirty and brash".

Technically, the synth's sound was captured at both its cleanest and dirtiest settings, with long modulations, sweeping filters, and many waveshapes being recorded in a process also involving a tape machine, various tube devices, API & Neve preamps, hardware saturation, EQ and modern moog filters.

This digitized version is available in Kontakt 5.5, Ableton Live 9.5, Logic EXS, Reason NN-XT, SFZ, HALion and Structure-compatible formats. Announced at an MSRP of $44, the Micro From Mars is currently available for the next few days at the spacial introductory price of $34 until next Friday (January 15th) at midnight EST.

More details as well as sound demos are available at the developer's website.