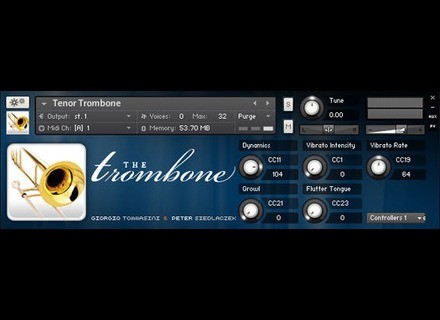 After The Trumpet and The Sax Brothers, Samplemodeling, namely Dr. Giorgio Tommasini and Peter Siedlaczek, has announced that The Trombone is now shipping.

This Kontakt 4 Player-based instrument can be directly purchased and downloaded from the company website now for €149.

The playing range corresponds to that of a top professional player, which is E1 – F4 (Tenor & Valve), and Bb-1 – Bb3 (Bass), respectively. Each trombone may be played with several mutes, including Straight, Bucket, Cup, Harmon (with or without stem). A virtually moving plunger is also available for wah-wah effects.

The Trombone family expands Samplemodeling technologies beyond the original limits. Multi-microphone anechoic recording, coupled to a specially devised "early reflections" impulse response, is designed to allow to reproduce the full, rich timbre of the instrument including its radiation pattern, adding at same time a controllable virtual space to the anechoic sound.

The real trombone is one of the few wind instruments that can produce a true glissando up to six semitones. Though very difficult to obtain with a sample-based instrument, the effect of the slide has been reproduced by a novel application of the "Harmonic Alignment" technology.

The result is a virtual instrument with few MIDI controllers, which can be played in real time or from a sequencer, in standalone mode or as a plug-in, for Windows or Mac OS X. The played phrases are now virtually indistinguishable from the real thing.

Pricing & Availability
The Trombone is supplied with the NI Kontakt Player 4. The Player is included as a separate installer, and no additional software is required to play the instrument. Stand-alone mode, as well as plug-in formats VST, RTAS and AU are supported.

The Trombone is available now for €149. It can be purchased only through the company's website by direct download. A backup CD is also provided as an option, for an additional €12.5.

All registered owners of any Samplemodeling instrument will be entitled to a 10% discount when purchasing The Trombone. Please note that this special offer is only valid until July 31, 2010.

All prices are plus VAT, if applicable.