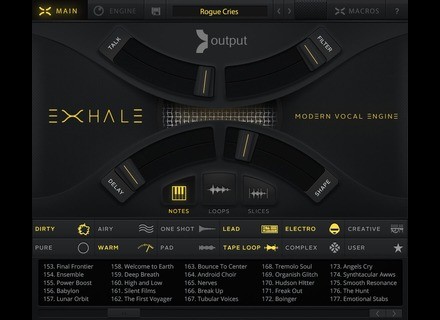 Output has released Exhale, a vocal engine designed for use in modern music projects as well as film scores and for sound design.

After recorded over 10,000 hours of vocals from singers and choirs, 25 sound designers spent six months tweaking the recordings to produce the modern and musical sounds. With over 500 presets, many of which include full banks of loops and slices, Exhale should give quite a lot of starting points to help users be creative.

The Exhale engine can also be used with time syncing FX, stutters, delays, pads, loops, macros, motion and more, either through the main page's 4 Macro sliders, or the modulation, mixing and effects featured on the Engines page.

Exhale is available now for $199, and until November 30th registered owners of a previous Output title are eligible to a crossgrade discount at some retailers. More details at output.com.