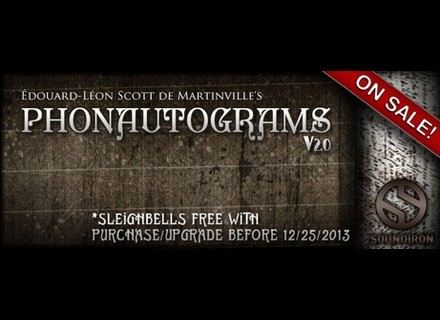 Soundiron announces the release of Phonautograms 2, an extended version of the original version launched by Tonehammer.

Phonautograms 2 is based on the original vocal file collection recorded in the middle of the 19th Century with the phonautography technique (sound impressed on paper) and decoded a few years ago by First Sounds, a collaborative organization with sound historians, engineers, archivists and scientists.

The first sound library was originally introduced by Tonehammer, and then reworked and expanded by Soundiron.

The samples that were used for this collection are those of a male singer which voice has been pitched an octave higher in the original recordings (Soundiron believes this is the voice of the inventor of the technique, Edouard-Léon de Martainville). Soundiron used these files with the original pitch, as well as the processed files in the correct tune for a two-octave range, with all the sound defaults of the original recordings. These sounds were then processed with DSP in order to generate ambients, drones, pads, textures, percussive sounds and more.

The library is available for the special price of $5 instead of $10 and if you order it until Christmas, Soundiron offers you Sleighbells.

More info and demos are available at www.soundiron.com.