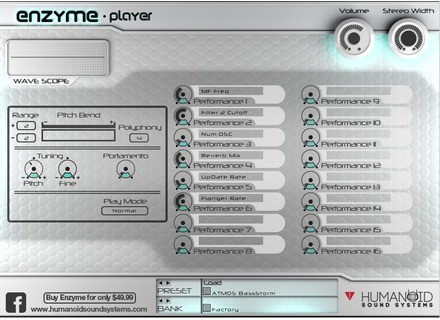 We’ve got gifts for everyone this week with the release of the Linux MultiMedia Studio v1.0 and the Enzyme Player for Mac and PC.

It had been a while since we had heard from the Linux MultiMedia Studio DAW, which had been in beta phase for years, but the developer was preparing final version 1.0, which is now available for Linux and Windows. LMMS 1.0 features a Song editor for melodies, another editor for beats and basslines, a piano roll for changes, a 64-channel FX mixer, a variety of instrument and effect plug-ins included and automation support. LMMS is compatible with many formats (MIDI, VSTi, SoundFont 2, LADSPA, GUS patches) and you can even import Hydrogen and FL Studio projects.

For Mac and PC, Humanoid Sound Systems released this week the Player version of its acclaimed Enzyme wavetable and physical modeling synth. This free version uses the same synthesis engine as the paid edition ($49.99), but you won’t find all the functionalities, in particular the preset management (you won’t be able to charge presets created with Enzyme nor save new ones, by you can use the ones created by HSS, 50 presets are also included). You won’t have access to the synth or effect parameters either, and won’t find the modulation matrix.

The Enzyme Player is a VST and AU plug-in for Mac OS X and Windows, you can download it from www.humanoidsoundsystems.com.

Have a great weekend!