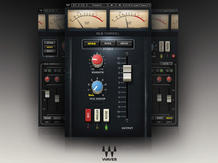 Publié le 12/05/12 à 11:01
Waves NLS (Non-linear summer) is a suite of software plug-ins (single channel and mix buss versions) that can be used in a DAW. Waves plug-ins are easy to download and install direct from their webpage. Authorization can be completed using any USB dongle, or over the internet if you computer is online.
This plug-in was designed to simulate the sound of an analog hardware console. It adds in some specific saturation modeled after three consoles - SSL, EMI, and Neve. The software contains hundreds of modeled individual channels, as well as the mix-bus from each console. This is cool because the imperfections of analog are what given 'analog' its sound. Each channel on these desks is a little bit different - saturation and frequency response are not identical. Its great to flip through the channels to pick which one sounds best, but this can also take a long time.

Mixing with an analog console sounds a little bit different than mixing in the box (ITB) because individual channels add a little bit of pleasing distortion (harmonics) and subtle compression to an input signal. Waves NLS comes with a plug-in to add this to your individual tracks. Another thing that makes analog consoles sound unique is the mix-bus summing. This part of the console also adds a little bit of pleasing distortion, subtle compression, and possibly some changes to the stereo field.

I think the EMI console is the most dramatic because it rolls off some top end and thickens up the low end. The SSL and Neve models don't change the frequency response as much, but can add a lot of harmonic saturation to your tracks. Compared to other analog modeling software (Slate Digital VCC), I think Waves NLS can add a lot more saturation on the extreme settings. In practice, I usually only crank up the gain until I can hear a small change in the signal.

Waves NLS can be used to remedy the problem of digital recordings sounding sterile and lifeless. Each of the different consoles add their unique 'color' or 'flavor' to your tracks. I really like the EMI console in this plug-in because it thickens up drum tracks, and can be used to take off the harsh top-end of electric guitars. Waves NLS has some tough competition with VCC, but in reality I think they are both different and complement each other well.
20