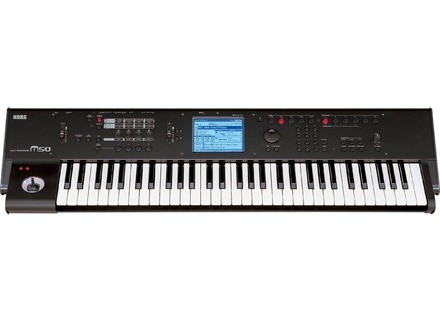 View other reviews for this product:
The Korg M50 Workstation is released in 2008, making many think M1 and who gets the synthesis engine of the M3 without KARMA. At first impressions, it is quite nice especially in black with slightly sloping façade which makes reading the screen and is lightweight 6-7kg ... it changes your life especially when you still had Motif or Triton 17kg.

- 61 semi-weighted keys, hit a pretty average compared to the old worksation, but today it is the 1000th completed aftertouch.
- Output XLR Mono / stereo headphone jack, SD card slot, USB connectors, jacks for pedals ... well the bare minimum.
- 256 MB of memory waveforms (1,077 multisamples and 1,609 drum samples) .. short there is plenty to do.
- There are also four small pads to record four agreements and play with ... it is a little gadget.


Navigation is made easy thanks to the touch screen quality. It is very simple to find what you are looking for in the different categories of sounds. There are several COMBI mode, PROG, SEQ ... etc. also have their assigned command impossible to get lost on this side ... Korg has always been rather readable at its interfaces even if for having a Korg Trinity Tritons and testing I have to say that the OS did not change much since then and if you have ever had Korgs you will not be out of place.

The manual is in French but a little light especially for the use of sequencer and editions and sounds and effects. A more comprehensive manual is available on the net but only in English. That said editing software is included with the M5O and make you the easiest and most accurate things like most modern synth. After this is not very complicated but not for those starting force yourself to study a little manual ... touch screen tends to make you fall in ease and then we easily magnifier important settings.

Consider having a SD card for backup and 2GB max to save all (Dial, editions, SETTINGS ...) because the M50 does not keep anything in memory.
Last remark it happens that sometimes the keyboard alone blocks which can be very annoying for those who do live ... In fact it is just necessary to update the OS

In terms of sound, it&#39;s pretty good, but there is a lot to say it anyway:

- For piano, Korg put the package ... there&#39;s really a lot of choice between pretty good acoustic pianos, organs, electric pianos some rhodes etc ... it is rather a strong point on the keyboard.
- Violins are also quite varied and
- The guitars I do not necessarily find thunderous but hey it is my personal opinion
- The electro sounds like the lead, motion ... are really prehistoric and must all re-edit from the outset whether or arpeggios sounds themselves ... I hallucinated because the keyboard is very electro and typed in this field is its weak point. I had a pattern with less than a one is light years.
- The rest is just the same leaning a bit overwhelmed especially if you are of modern music, anyway keyboard does not sound vintage so this is more for those who make electronic music (hous etechno, dub step , modern hip hop to electro sauce)
- I&#39;d end up a good note so as not to discourage you, drum kits are very good and many modern, which allows for a bit of terrain.
You each class of sounds free beaches to multiply editions sound and increase your database. But hey when you know there are already a lot of work to do with those already available ... it&#39;s frustrating final

Combi mode is pretty nice, there a lot of pre-recorded patterns and you can choose the desired pattern on each program to play a rhythm. It is possible to edit its patterns.

Finally for the KORG sequencer is, I do not like too much logic and I use my Mac and software sequencing therefore share tell you that it is to record what goes through your head forget it .. it stops there. In addition, the sound loses a little in intensity and impact in the recording mode.
The arpeggiator is correct for the machine price ... or ... or fabulous top.


I got a little immortalized on the sounds but it is above all the plays on the M50.
I thought by buying like why not acquire a more modern worstation and indeed I am happy to have been for nothing because in the end I sold it quickly before it becomes a burden. In fact, it has everything, retro design, ease of utlitisation, Workstation réçente therefore in principle for the times ... But apart from the piano I am appalled to see that Korg did not give us a pannel Electro (Lead, Motion) ... more on page ... you have to rework all the source and ç&#39;est still mad at that price it does not have the bare minimum ... especially for a well-typed electronic keyboard at the base as M50 ... it is the height anyway ... Basically you buy this kind of machine to the modern sound and save time ... where c &#39; Quite the opposite ... I feel that it is designed as a digital piano, but not as a true workstation. I assigned a 4/10 that is insufficient for a 61 or 73-key Workstation 2008. For M5O 88 it can be a very good digital piano ...

For those looking to make his drop ... it&#39;s a real waste of time and really poor side of Electro ... I also not understand the test audiofanzine unless c is me that is no, I would not call the M50 as a small but as a gifted handicapped by its glaring shortcomings. it reminds me of a beautiful 205 GTI Tuning that a diesel engine ... it looks like a racing machine but in fact it just needs work ...
I know this is a good entry level but there is a minimum ... Anyway A big disappointment.