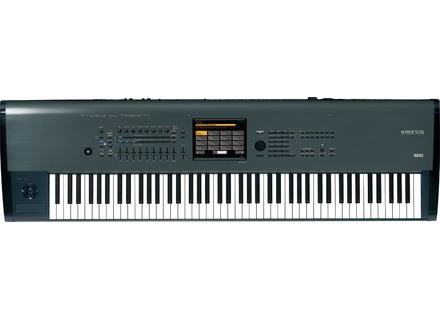 Kronos 88, Workstation from Korg in the Kronos series.

« Everything a musician could ever want »
4

View other reviews for this product:
The Kronos 88 is a workstation with brilliant sounding patches that really boosted my creativity. I use this keyboard all of the time when I go to the studio, it is actually one of my favorite ones to work with there. I have never seen manual for it and never needed one. The first time that I had the chance to use this board I felt right at home with working on it.

The Kronos 88 has 9 really good sound engines that allowed me to create different sounds that most other boards don’t have. I have also used the Kronos 61 which is pretty much the same as the Kronos 88 but it has less keys and it is smaller. If I was going to recommend one or the other I would say go for the 61 because of its portability. The 88 key Kronos is very big and bulky, there is no way that I would want to travel with it for any types of gigs.

This keyboards sounds are by far its best feature. I love Korgs workstations and synths because I feel they have the best sounds, all of the sounds are always warm full and rich. The sounds on the Kronos 88 are great for all types of music and most of the time I am working with the Kronos it is to create film scores which I love doing on it because of its ability to really create some ambient sounds that are different and not so much like every other keyboards sounds.

I love the acoustic pianos and organ sounds on the Kronos 88. They keys feel great, and that is another difference between the 88 and the 61. The keys are on 61 are “lighter” and not as heavy as they are on the 88 version this is good and bad because I love having the feel of real weighted keys but that always means a bigger and heavier board. In the studio this keyboard is also used via MIDI with computer sequencers. It has just about everything a musician could want!
Did you find this review helpful?yesno