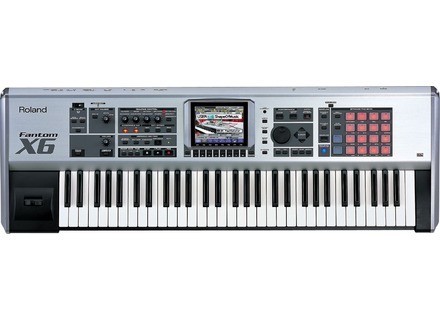 Fantom X6, Workstation from Roland in the Fantom series.

View other reviews for this product:
The Roland Fantom X6 is a keyboard and music workstation consisting of 61 keys and a whole lot of parameters. It's pretty much an all in one station for keyboardists and composers alike. It's got an LED screen to monitor everything on as well. As far as it's connections go, it's got standard MIDI connections as well as a slew of 1/4" jacks for your ins and outs (six outputs), and for two pedals. It also has a USB port for easy transport of files to your computer. It's a fully polyphonic keyboard and also has a unique assignable wheel.

The make up of the Roland Fantom X6 certainly takes some getting used to, as this is a really in depth work station that offers a lot. It's going to take months of practice to get used to how to use everything on here, but using it for it's basic features is simple enough. The LED screen shows you the different patches as well as all sorts of parameters and further control. For hardware parameters, it's got all sorts of things to work with as well, including a recording section, a drum pad, and a variety of other gadgets to work with. A manual would definitely be a good idea for a new user, but I haven't seen one for myself.

The sounds heard on the Roland Fantom X6 are extremely impressive. It's got pretty much every sort of sound you could think of, ranging from acoustic pianos to synthesizers. I'd say that all of the sounds are pretty realistic, with the more synth like sounds being the most. The presets are very helpful and sound great, even if you're just using them as starting points. The rhythms and arpeggios are also awesome to have, although I haven't delved too deeply into this aspect of the Fantom X6.

The Roland Fantom X6 is pretty much the perfect keyboard based workstation, and is only one within a line of impressive Fantom keyboard. It isn't too difficult to use that you couldn't just jump right in and try it, and also isn't too basic as it has a whole lot you can do with it if you have the time and are willing to spend it learning how to use this. If you're a keyboard player looking for a great all purpose workstation, the Fantom X6 and the Fantom series keyboards in general absolutely need to be factored in.
Did you find this review helpful?yesno