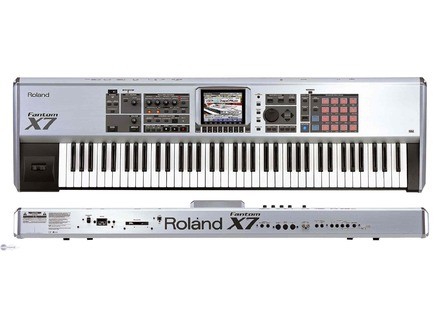 Fantom X7, Workstation from Roland in the Fantom series.

View other reviews for this product:
The Roland XS 7 was a keyboard that I purchased back in 07 pretty much on a sudden impulse after I fell in love with it at guitar center. After messing around with it for 3 hours (in the store) I new that I had to have it. The sales guy didn’t even have to sell me on it, I whipped out the credit card and purchased it. When I purchased it I had the though that I wanted it to be the main part of my studio with my drum machine and other audio gear coming into it with audio and midi connections, then from there I would export into pro tools in my mac. But after using it for about a month I just didn’t feel like that was the best workflow for me so it then became more of like just a sound module and a midi controller. Which I was upset with because for 26 hundred dollars is a lot of money just for a sound module and a midi controller. So I even though about returning it but I never did.

It was easy to use, if you have any problems there is a website by roland that you can go to that will have a bunch of other users that can help as well or you can go the old fashioned way and crack open the manual and start reading.

The sounds are good, there really arnt too many effects that are on board that you can use to add to them though which also surprised me for the price I would think that you would have a ton of effects to work with.

Yes you should get this board, this was one of the best boards out and still is even though its around 7 years outdated now maybe even more I can remember exactly when it came out. But its still worth the buy today, it doesn’t cost that much brand new now though. Because of time, the price as came down a good bit.