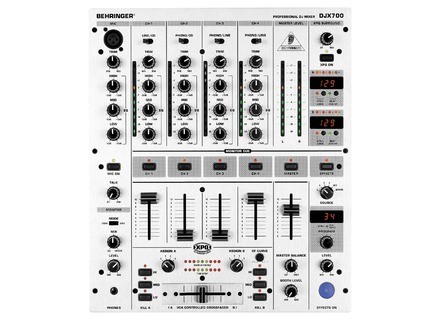 DJX700, 4+ Channel Mixer from Behringer in the Pro Mixer series.

View other reviews for this product:
Very good features for money, shame that effects dont feature more control such as cutoff frequency, resonance, delay time, rather that just one universal &quot;Level&quot; control which just controls the volume or the effects. I have had a lot of fun playing with the effects, could do with more control though, dissapointed about this. Beatcounter seems to be a useless gimmick and I rarely use the &quot;XPQ surround&quot;. I do like the fact you can choose the crossfader curve thoough.

Interface fine, pretty standard. No problems. Master out could be a bit further from channel 4, have knocked it by accident few times. People moving up from a really low end mixer might take a while to get to grips with the assignable crossfader, not hard really though. The beat counters could be easier to use, seems to me they rarely work, and very very rarely actually show the correct tempo. Just seems to say 160 most of the time. This would be not of much use to those who need a beatcounter. Kill switches would be better if they were easier to turn of and on quickly. As it is they arnt.

Sound quality good. Sometimes I think it lacks the high frequency but it might be due to other equipment

Am in the process of returning it, due to countless problems. The main reason for returning is the crossfader broke. Ive had a look inside and although the part connecting the knob to the insides is metal, the bit this is joined to is very thin plastic! which broke! rubbish design, I wasnt even giving it much stick. All the controls feel a bit wobbly and unsure of themselves. Ive also experienced leak between the monitor channels when at fairly high volumes. This makes mixing a bit of an ordeal. Also, the button to turn effects on isnt that bad, but sometimes has a mind of its own. As I said earlier the beatcounters might as well be replaced by a cigarrete lighter/bananna holder, as t'would be a lot more useful. The actual case build seems quite good, it hasnt fallen apart, but im not holding my breath and its only been moved 3 times in its 6 month life. Basically this mixer is a cheapo rip off of the pionneer DJM 500 I think which is a lot nicer. If you got the money get that instead (I dont!)

Well I loved it for the first 3 months or so.. Now I dont so much hate it, but I dont quite feel the same anymore, it hasnt got what it once did and to be honest I cant see us lasting much longer. Let me rephrase that; I cant see it lasting much longer. Don't love it - Dont hate it. First 3 months love of about 8, now due to broken monitor cues and shattered crossfaders, i barely feel half that way any more.....

Originally posted on FutureProducers.com
Posted by: pielicker ( 6-, 2005)
Did you find this review helpful?yesno
Cookies help us improve performance, enhance user experience and deliver our services. By using our services, you agree to our use of cookies. Find out more.