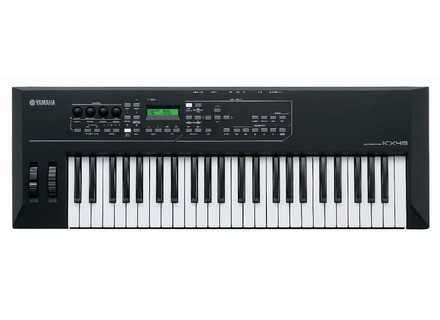 The concept of the new KX keyboards is to function as a USB controller keyboard for DAW softwares like the included Steinberg Cubase AI4 and for VSTi plug-in instruments like the also included Steinberg HalionOne. To achieve this aim the keyboards are equipped with numerous buttons: control the transport functions, select tracks, mute or solo a track. You'll find cursor buttons plus enter/escape buttons and more.

Use the four realtime controllers to control virtual instrument plug-ins - select one of the many included "Control Templates" to set the controllers to the parameters of popular VSTi plug-ins. The LC display is used to monitor the sent control change values. You can change the Control Templates to your own needs or create your own Templates by using the downloadable KX editor software. And there is an arpeggiator integrated into the KX masterkeyboards - let your virtual instrument plug-ins be played by its more than 340 arpeggio patterns.

This whole bunch of features is built into a compact housing which black colour suits every working area. The KX keyboards can be powered via the USB bus or by using a power adaptor.

Of course the number in the name refers to the size of the keyboard - the new KX keyboards come in four different versions to suit your amount of space and your need of keys: