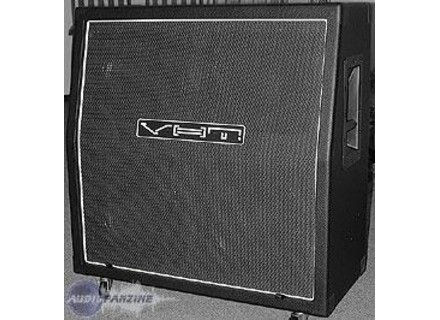 View other reviews for this product:
I've owned one of these for about 4 years now. Originally when I bought it, I was in a heavy metal band. Or progressive heavy metal more specifically. There were 3 guitarists in the band and we were all really serious about our tone. We wanted a cab that had a balanced sound, with a strong tight bass that would never get muddy. Some of us were using 7 strings and we had isssues with cabs sounding boomy or undefined through our amps. I was playing an Uberschall. The other two guys had ENGL amps. We originally tried Orange (too boomy and loose in the bass), Bogner (too woody and organic for us), Ear Candy (overrated all around), Mesa (just muddy)... But I digress. We experimented with a lot of different speakers. Typically we found Vintage 30's were the best but the cabs we were using never gave us the response we wanted.

I went looking for alternatives and found VHT (now Fryette). I had heard they had an extremely tight response. Was skeptical. They were fairly expensive then and I believe they still are. But at this time VHT wasn't a super well known company. I finally picked up a used one and tried it. The tone was amazing. Very tight, balanced tone. My rhythm chugging never felt loose at all. Instead the palm mutes were tight and defined. Solos were focused. Everything was as needed. By the way, the stock Fryette speakers in these are great. I don't know what they're based on but coupled with this cabinet they're wonderful. I know some people put in V30's but I've never had a desire to.

Structurally it's an interesting design and I think it explains the tight response well. Speakers are front loaded and the cab is much deeper than most. The wood is thick like it should be. At this price point you are getting a very well made cab, not MDF garbage. Yes it's expensive, but if you require the tight defined tone that they give, it's worth it. As far as I know these are really only used in the metal genre and that makes sense to me. Personally I think they are great for metal unless you want loose response then look elsewhere.
Did you find this review helpful?yesno
Cookies help us improve performance, enhance user experience and deliver our services. By using our services, you agree to our use of cookies. Find out more.