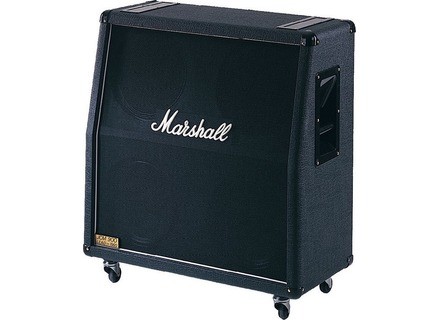 Value For Money : Poor
View other reviews for this product:
Baffle archi-known, exists in several versions (hp) is what must be some good finds, sr gt12/75 between the equipment and the vintage 30 or greenback, it must have the cart!
Here is the test that is 1960A, and yes, it is not terrible, terrible !!!!!!
when changing a combo that cattle Obviously it looks better, but if you take the time to compare, there are limits quickly! the 4x12 acts of references, the argument of Marshall is the first report qualitprix! test a 212 engl vintage 30 2x12 in config, it eliminates the marshall, and the price is for the engl, found less than 600 euros new! my last concert, I could not help but to get connected to a 1960a, and presto, the treble, which tore eardrums, the rglage bass that goes from 11 16h without much rsultat make his rough hand! really have to love the sounds cradingues (which does not dispute, matter of taste!)!
go, I do not get the stuff for free, and f reconnatre it is complete in connection, select the impdences, Mono / Stereo! he had to the arguments, because the pure, his reputable is made on-point line!

complment: 1) Marshall is a vritable prcurseur is indniable!
2) the speaker is not the ONLY MODEL 1960 A and only A !!!!!!
3) that optimizes Bafle marshall for their heads and amps, it's normal, but they are not suitable to be connected to other things, f arrter!! otherwise they are as Hugh & Kettner Warp with their concept and wortex, or is sold to a pice! a baffle head jcm an orange, a slap trs well! which is often criticized, and as I wanted to say is being proposed that 9.5 times out of 10 cabinet ds we play in groups, it is a GREAT DEALS, but who my opinion and that of many others who have SSAI something else, not worth its price and reputable (which comes from its so!)! randall in a 2x12 or engl, is much more versatile with a much more "pais" and consistent, and not frustrated, and they cost a whole the 2 a little less than the 1960A!!
4) Long live the rock hard rock and heavy mtal! Marshall's expertise, but if someone wants to continue living, can not rest on his glory goes! rest on its laurels, it's sleeping on his future!
I note what it is worth, but I keep it!
See the source
Did you find this review helpful?yesno
Cookies help us improve performance, enhance user experience and deliver our services. By using our services, you agree to our use of cookies. Find out more.