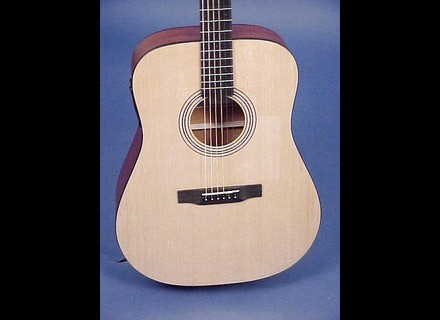 View other reviews for this product:
The Larrivee D-02E is an acoustic/electric dreadnought style guitar. They first made this guitar in the late 1990's and stopped making them soon after, and I was the first owner of mine and have had it about ten years. The guitar has a Fishman Deluxe SC pick up built into it which is activated when you plug your guitar in, which is a pretty cool feature. I don't know what sorts of woods this guitar is made out of, but it deifnitely seems to be of a high quality in terms of it's build.

Using and playing the Larrivee D-02E isn't difficult under any circumstances. As far as the pick up is concerned, it's got a simple three band equalizer, as well as brilliance control, a notch filter, and phase. Playing the guitar is really a pleasure as it feels nice and easy on the fingers and is in general a pretty easy guitar to play. It's best for playing chords, but it's more easy than average to play lead parts for an acoustic guitar.

Getting a good sound from the Larrivee D-02E acoustically is as simple as knowing how to play, as is the case with getting a good sound plugged in. It has a full bodied and vibrant sound, which translates pretty well to the electric end of things. The Fishman pick actually sounds great, and I'm really more skeptical than anyone when it comes to acoustic/electric guitar pick ups. I haven't used this for recording, but judging from it's open sound it will work well in any situation you put it in.

While they were only made for a brief period of time and have now been replaced by the D-03 series of acoustic/electric guitars, the Larrivee D-02E is a great all around guitar. I don't think that it would be all that easy to get your hands on one of these, as it doesn't seem that they made too many of them, but if you do come across one the price should be very reasonable used for a guitar of this ilk. In my opinion the D-02E is as good of a guitar in this mid range price as you'll be able to find.
Did you find this review helpful?yesno
Cookies help us improve performance, enhance user experience and deliver our services. By using our services, you agree to our use of cookies. Find out more.