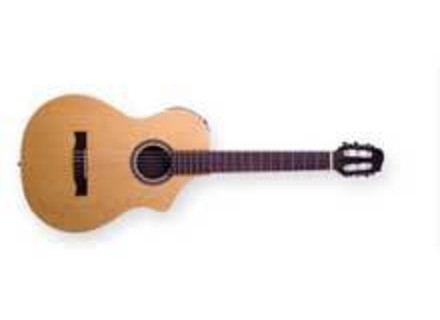 View other reviews for this product:
made in china

I play mainly on nylon guitars,
and then I forget the handle so it's nice,
an impression of lightness,
I played it for hours without fatigue, very nice
acute on more accessible than normal thanks to a classic cutaway

as stated in the notice,
can vary between two of its models,
an Maldonado Flamenco 2004, and Torres 1867 classic
sounds a bit pompous as this and this is the fart,
good but in reality it sounds good,
and much better than any guitar equipped with a piezo,
and no feedback problems
too much noise as when you put a microphone in front of a classic and it takes all sounds too ambients and slips on the ropes

I had a big concert multiac and two Godin, who were worth the same price, but I was not this sound, and not the violin,
for the Godin on the forums, there's that swears by it and have never been able to pay, and those who bought one, and have since sold disappointed.
often problems on the frieze of Godin
Canadian violin factory, and it is expensive because you pay the final concept
ultimately, the line 6 was made in China,
it is no longer, but as for the Chinese violin for sound,
I prefer that to godin ...
See the source
Did you find this review helpful?yesno
Cookies help us improve performance, enhance user experience and deliver our services. By using our services, you agree to our use of cookies. Find out more.