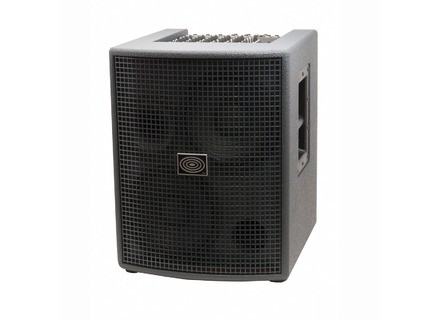 View other reviews for this product:
Transistor. Everything was written in previous opinions.

- Note that it is also DI (1 XLR output), but careful not to overdo the input gain to leave the margin sondier opposite. The Volulme-Master is independent from the XLR output

- The + is sending AUX ... which pretty multiplies opportunity and allows you to use multiple sets (already tested)

- For it is a little reverb effects not unpleasant choice.

- Super simple ... for someone who knows how to walk a small mixing desk. it sounds all right. Will have one button that is low cut in + for use with a sub (never tried)

- I use it on my live acoustic scraper + pedals or 2 separate tranches and it sounds great, big potato in the bottom, precise treble ...

Yes, I tested it on other instruments equipped with good microphones, it works ... in fact it's just a good little mixing desk with a good bowl ... perfect for any acoustic instrument.

I use it for 8 months as in ERfKE on stage as his level back ... there's this thing and that's why I took the 400w to be quiet at this level. I had already tested a 150w on a concert and had found not powerful enough.

Sometimes I use it as DI (XLR ass amp) and it works pretty well.

It weighs 21 KG memory. The only pb is that the mixer is at the top, I built a small protective cardboard cut I put the amp in its cover and it allows to put stuff on the amp without breaking anything.

I remake that choice without any problems.
See the source
Did you find this review helpful?yesno
Cookies help us improve performance, enhance user experience and deliver our services. By using our services, you agree to our use of cookies. Find out more.