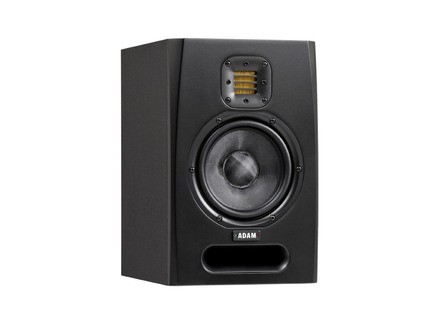 F5, Active Monitor from ADAM in the F series.

Over the last years, ADAM has become a house name in the studio monitor market. The brand itself has become the symbol of ribbon tweeters. Originally focused on the highest market segment, the manufacturer progressively started to offer more affordable speakers with the A and AX series. Now, the German company goes one step further with the new F series, presented at the last Musikmesse, which combines appealing features and an affordable price. Is it a good deal?

When we heard that ADAM planned to offer a speaker featuring a 5" driver for $250, we couldn't believe our eyes nor ears. Although the manufacturer has been permanently decreasing the price of its entry-level products for several years now, the step taken with the F series is quite something. The small A5X, which was the most affordable 5" monitor in ADAM's catalog until now, costs around $500 in stores. So the F5 is 50% cheaper than the A5X ─ a huge difference! 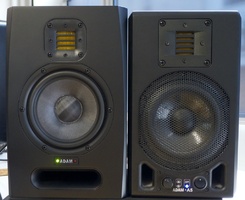 The bass port is on the front panel, right underneath a pair of red and green LEDs. Why two LEDs? The F5 have a bypass function that turns on automatically after 20 minutes idle, which is very good news considering that the power switch is placed on the rear panel! But let's not forget that when bypassed a speaker still consumes more electricity than when turned off... On the rear panel you'll also find wall-mount thread inserts and the power socket.

The connections are quite comprehensive: one XLR/1/4" jack combo plus an RCA connector. The volume control, which is unfortunately on the rear panel, is surrounded by two trim pots for the two shelving filters that allow you to boost/cut up to 6dB above 5kHz and 300Hz. You will also find here a switch to enable a low-cut filter set at 80Hz, in case you want to add the F series subwoofer to your setup. ADAM spared nothing on connections, warranty (2 years) or controls, which are pretty comprehensive considering the price of the speaker.

When it comes to technology, the 127mm low-frequency driver is made out of paper/fiberglass and driven by a 25 watt RMS A/B amp. A second identical amp drives the ART ribbon tweeter. Last but not least: the speaker is not magnetically shielded, so avoid CRT screens (does anyone even know what a CRT screen is anymore?).

Time for a listening session 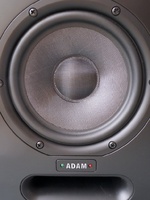 To test the speakers we compared them to our ADAM A5, a previous version of the A5X. The A5 belongs to the A series, which is one range above the F5, making it an interesting challenger.

With this song, the first obvious thing is that high-frequencies (between 6 and 8 kHz) are less present with the F5. The result is a rather dull and less detailed sound than with the A5, and sibilants aren't as present. The speaker sounds more "boxy." The low frequency range goes down deeper and it is more present but less controlled than with the A5, which means a slight precision loss. Every time we switch to the A5 the sound is more open and with more air... Regarding dynamic response and stereo imaging, we couldn't notice any obvious difference.

In the intro, the reverb reveals a glaring difference between both models: it is much less audible with the F5. You'll have to keep in mind not to add too much reverb while mixing because the F5 tend to attenuate it. Cymbals and hi-hat sound a bit smoother with the F5: the high-frequency range seems slightly damped, while distorted guitars sound less bright and don't quite cut through the mix. We had also the feeling that the mid-frequency range is less consistent, which makes the overall response less intelligible... We were somewhat surprised by the fact that, even if from the same brand, the difference between both models is so obvious, especially considering that they use similar tweeters and woofers of the same size. Regardless of the frequency range (highs, mids or lows), the F5 cannot really compete with the A5.

The trumpet and the saxophone have less presence with the F5 and the recording room seems smaller. The double-bass sounds almost the same with both speakers and the F5 performs alright when it comes to dynamics. This is the song where the F5 can almost bear comparison with the A5!

The low-end is less controlled and a bit less clear, especially the drum kick and its attack. We even noticed a slight masking effect. With brass instruments we found the same as on Miles Davis' song: they have less presence, giving them a lack of precision compared to the A5. The hi-hat also suffers from the 6-8 kHz attenuation. The delay on vocals is slightly attenuated, which means that you will need to be careful with delay effects, as with reverbs.

The intro lacks room acoustics information. On percussion instruments, attacks and heads are hardly audible with the F5. Moreover, the low-frequency range tends to mask higher frequencies during percussive fills. In short, the sound is less intelligible.

First reaction after the listening session 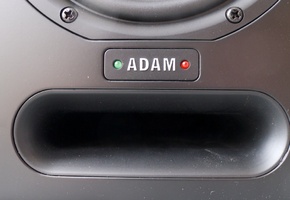 Although both speakers are ADAM, equipped with ART ribbon tweeters and 5" drivers, they sound quite different throughout the whole frequency spectrum. We noticed a difference in the high-frequency range between 6 and 8 kHz. The A5 are more precise while the F5 sound a bit duller. This has a direct consequence on the presence of the instruments and the definition of the reverbs. These frequencies are crucial because they allow you to distinguish the different instruments easily and to have a good perception of space. You'll have to remember not to apply too much reverb while mixing with the F5. To make up for this weakness, we recommend a slight high-frequency boost (just a few dBs) using the high shelve filter (above 5 kHz). 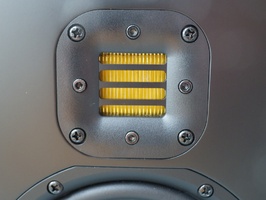 The mid-frequency range (400 Hz to 2 kHz) is also less consistent than with the A5. In some cases, we noticed a masking effect and some frequencies disappearing in detriment of other frequencies. This could be a problem while mixing.

The low-frequency range seems less controlled that with the A5. We recommend using the 80 Hz low-cut filter to clean the lowest frequencies a bit (which are difficult to reproduce by a 5" driver anyway). The controls on the rear panel make it possible to balance the overall response, which is an excellent thing. In fact, you don't always get such effective controls on budget monitor speakers.

ADAM redefines its entry-level range with very affordable speakers in comparison to their other products. The German manufacturer spared nothing on design, assembling quality, controls or connections. The speaker is front-ported, and the auto-bypass helped us forget that the power switch is on the rear side. The main difference between the F5 and the ADAM series above it relates to the mid-frequency range, which is less consistent. However, the F5 is a good monitor speaker that will allow users to take their first steps and learn the basics before buying a better monitoring system... from ADAM, maybe!