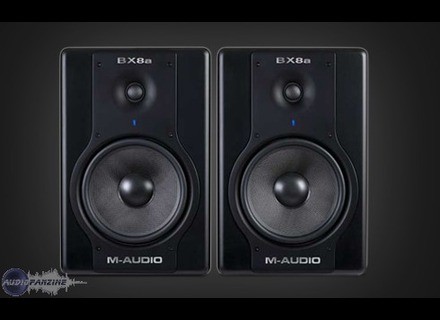 BX8a Deluxe, Active Monitor from M-Audio in the BX series.

After having updated its entire range of audio interfaces, M-Audio now looks to update its monitors, especially in the wake of their excellent high-level EXS66 monitors. These updates have had great results on the small Studiophile AV40, so let’s see what’s happened to the BX8a, for which a Deluxe version was recently released.

The BX8a Deluxe monitors are equipped, as their name suggests, with an 8" boomer. The latter, made of curved Kevlar, is paired with a 1-1/4” natural silk, waveguide-loaded tweeter for a frequency range extending, according to the manufacturer, from 30 Hz to 24 kHz ... In terms of power, these monitors are said to deliver 130 Watts. This means bi-amplification of 70 watts for the bass amplifier and 60 watts for the treble, which is more than sufficient for nearfield monitors. As for their looks, there’s nothing special to mention. Even if they’re not as original looking as the EXS66 monitors, the sober design, black matte finish, and the little blue power LED all look very nice. The well-adjusted ensemble and weight (26.4 lbs./unit) complete the impression of solidity and quality.

You might be a little surprised by the absence of features on the back of the monitors. In addition to the On/Off switch, the power cord jack, and TRS (Jack 6.35) and XLR inputs to connect the monitors to your audio system, there’s only a volume knob. No filter, no EQ, no boost: just a volume control with a middle position that’s not serrated. So it’s not possible to adjust the response curve of these monitors to adapt them to the room in which they’ll be used. Also you should be aware that there’s a vent at the rear of the enclosure: you will have to keep them a safe distance from the wall or it will affect the bass. This is a defect that was already present in the BX8a and which hasn’t been corrected in this version. In short, make sure you have enough space ...

We decided to listen to, and a/b these monitors, with another pair of 8" speakers in the same price range. We chose Prodipe Pro 8 monitors, which are a favorite in home studios and which, despite being 50€ less, offer high frequency adjustments in addition to a master volume. Songs were played through Foobar and encoded in FLAC (a lossless format that loses no data in the spectrum), while a Mindprint TRIO served as a monitoring controller to go from one to the other.

The first extract was from Time from Dark Side of the Moon by Pink Floyd. Once past the clocks which open the song, the long percussion section let us assess the stereo image. It was clear that the two pairs of monitors were on equal footing in this regard: everything’s well placed in the stereo image. The beginning of the song, however, reveals a difference between the two, namely a concentration of mids in the Prodipe monitors, whereas the BX8a monitors seem to go down lower and rise higher.

This is also the case with Michael Jackson’s Billie Jean, in which the bass is more prominent on the BX8a. Same for the highs, which translated into much more detail in the funky guitar, hi-hat, and Michael’s voice itself.

'More bass' or 'too much bass' is the question that arises when listening to Angel from Massive Attack. It’s in fact night and day when comparing monitors, so much so that you wonder if this portion of the spectrum is not over compensated on the M-Audio monitors. Listening to the same song on Mackie MR8 monitors (not used for this comparison because they’re 200€ more expensive) confirms that the BX8a are too bassy, and once again we regret the absence of a filter to resolve this issue. In contrast, the highs are really much nicer sounding than Prodipe’s and especially gain definition on cymbals, vocals, and you can feel the spectrum widen there where it seems to get narrower on the Pro 8 monitors. Everything seems more ‘up front’ on the BX8a monitors as well, thanks to the highs ...

From start to finish of Also Sprach Zarathustra by Strauss, M-Audio lows provide dramatic timpani which are absent on the Prodipe. And when the strings come in, the personality of both monitors really comes to light: where on the Pro 8, strings and brass are mixed, on the BX8a, they’re clearer and more defined .

Walk on the Wild Side by Lou Reed has us focusing on the voices, and there, for me, there’s no comparison: the M-Audio monitors go well beyond their competitors, especially on the highs. This is true for Lou Reed’s voice and it’s reverb. It also goes for the background voices, and also for the saxophone solo at the end: everything seems more distinct, more airy and more up front on the M-Audio monitors. Same impression on In a Sentimental Mood by Ella Fitzgerald: Ellas’s breathing as well as the small noises her mouth makes are much more audible on the M-Audio. You hear more things with these speakers and that’s basically what you’re looking for in a pair of monitors.

Well-built and elegant looking, the BX8a Deluxe are nevertheless not perfect. Between the vent at the rear and a tendency to over-compensate the bass, we wonder why they didn’t include more than just volume settings in terms of adjustments. But compared to other speakers in the same price range, they clearly have their advantages. You’ll particularly like the width of their spectrum, particularly the highs which are very convincing. These latest M-Audio monitors have an excellent value and are likely to interest those who want to make their debut into the difficult science of mixing. Admittedly, there are better monitors, but more expensive,…even much more expensive.