When you talk about electric guitar, it's inevitable to think about the instrument and an amp. To the point that when you mention "direct recording" to some guitar players, they cry "heresy!" and shun it as a sort of safety net for budding audio engineers. And yet, many legendary tracks include guitar parts recorded sending the guitar signal directly into the console, without going into an amp. And we are talking about thousands of records! Here's a non-exhaustive list...

Let's begin with the most obvious case: clean sounds. It is indeed easier to imagine getting a clean sound with a direct recording. Except that when you listen to your "clean" direct recordings, the sound might seem a bit sharp, too thin, without personality. Well, wouldn't you know, it's not that bad and certain artists have actually polished their direct sound in such a way that it has become their personal signature! Take, for instance, the great Nile Rodgers and his famous biting rhythm guitars which owe a lot to direct recording. The guitar sound of the timeless Le Freak was conceived plugging his Stratocaster directly into a Neve console:

Prince also did something similar on his worldwide smash Kiss:

So, in short, it is possible to get good clean sounds directly recording a guitar. But it's a completely different story when it comes to distorted guitar... Or is it?

In '68, John Lennon and George Harrison plugged their guitars directly into the EMI console for the iconic Revolution.

In '71, the famous Black Dog riff by Led Zeppelin was performed entirely on a Les Paul plugged into a consoles preamp with a DI. The result was then sent through two Urei 1176 compressors in series.

More recently, in '91, the utterly overdriven guitar on Nirvana's anti-macho song Territorial Pissings was created combining a "traditional" and a direct recording on a Neve console.

To cut a long story short, it is possible to get a wide array of sounds plugging an electric guitar directly into a mic preamp. But it isn't as easy as it sounds…

To carry out this sort of recordings you need at least two things, besides your audio interface: a DI box and a mic preamp. 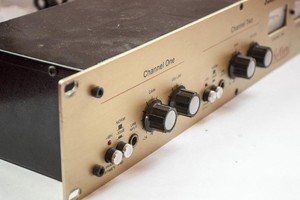 "But my interface already has an instrument input and a mic preamp," you are probably thinking. Sure, but for this type of sound it's crucial to be able to control the input and output gain of the mic preamp, before the digital conversion. On your audio interface you can control the input gain of the mic preamps, but not the output gain before it goes into the converter. If you push one of these preamps to the point of distortion, as light as it may be, you risk distorting the converter, too, and that's something you don't really want to hear. Hence, the solution entails using a DI box to plug the guitar into an external preamp, which is in turn connected to a line input of the audio interface. With this setup you can regulate the input gain at will, while controlling the excess level produced with the output gain in order not to overload the converter of your soundcard.

The sound you get using this method obviously depends on the external preamp you use. But that doesn't mean you need a prohibitively expensive SSL, API or Neve preamp. There are some quite surprising entry-level preamps in this regard. And, in the end, it's always a matter of taste. I, for instance, used a Bellari RP520 preamp for many years with satisfying results. And nowadays I sometimes regret having parted with it, which is quite telling!

That's it for today. See you next time for some new adventures in recording!