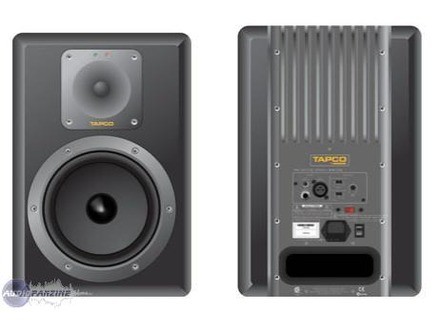 View other reviews for this product:
Lenceinte TAPCO S-8 is active dveloppe MACKIE by far the best studio monitor amplifier in its class. Dune depth, Linari gnrosit sound and dune lgance Exceeds lentendement, she has it all, everything.
Lide Jtais trs excited to see the back MACKIE people of his surname, since once sappel MACKIE TAPCO, and find that new products taient commercialiss to reposition themselves in a market whose prices are falling continuously and o lon assists lmergence new products and new brands continuously.
By focusing on the dynamics and a decent speaker linares Pro (with a budget of 1000 euros Exceeds pair) with the MACKIE TAPCO S-8 opens the brche the march of monitoring environment range with this pair of active speakers whose budget runs - 600 euros a pair!

Jai then test at the same time with the same sound source new TAPCO S-8 else with speakers such as Studio M-AUDIO BX8, ALESIS M-1 MKII active EVENT TR-8, THROUGH 2031 BEHRINGER, YAMAHA MSP-5A and SAMSON Resolv-80A. Remember that all these products are around an cot between 450 and 650 euros a pair. Let us compare what is comparable.

The TAPCO S-8 Mackie lintgralit mystifies the COMPTITE. Both in performance on the dynamic and effective linares gives this product segment. It possde as BX8 M-AUDIO paramtrages of the switches (high-cut filter / Coupe Netherlands) and a bandwidth that is rare in this CATEGORY. Needless denvisager Lachat dun Sub, the bass are and they are well compared with the HR-624, S-8 did absolutely nothing to envy of half the price. Nest is not in the SPECIFICATIONS of HR-824, but the 624 that did behave.

The float of the Boomer S-8 is impressive, as with jou rgime up with Watts, S-8 is lenceinte that evolves best on large power ratings. In addition, to any DViT indsirable saturation, a tmoin light (red LED) indicates when the Peak is above normal lenceinte opportunities. Quon not have no right to the Exceeds, but always in the red and it breaks.

In fact, curiously, this test really made my RALIS how Behringer Through 2031 are dead, which does not mean linear because the linear professional monitoring are not really fun to work but Thru 2031 nont no expression. As for the MSP-5A, I think Yamaha should reconsidrer price, although they are good small speakers, they have become a little Chréa (given Larrive TAPCO S-5 399 euros the pair while Yamaha offers its MSP5A around 550 euros). The EVENT is on the shelf, the speakers are amazing SAMSON, who believed Leut. 50A of the 80A, they all have a particular feature and asking INTERESTED be costs and use. Monitoring the Alesis are still missing today from the performance against BX8 or S8, but given what both moon-references become less amplified Chres the march I am the M1 MKII Active Fidler. Now the couple is tandem: BX-8 and M-AUDIO TAPCO S-8.
Jai today a preferences for the S-8 that is more oriented Rock / Techno / Dance / Pop indy while the BX-8, more conventional sapparentera also if you want this type but music is a bit more sparkling for the Classic / Pop / variation on my mind. A friend would say: All dpend plan on where you are situated over ten lide you do

Reminder: TAPCO has released a MODEL: S-5
Is that of happiness

Greetings
Dr. Frog
See the source
Did you find this review helpful?yesno
Cookies help us improve performance, enhance user experience and deliver our services. By using our services, you agree to our use of cookies. Find out more.