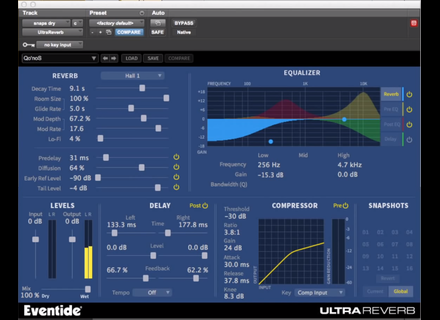 The new Eventide plug-in is a 9-algorithm reverb and it’s available with a special introductory price until October 17th.

The UltraReverb features 9 types of reverbs, including rooms, plates, halls, chambers and ambiance from the H8000 Ultra-Harmonizer.

You can also add pre- or post-reverb stereo delays with tempo sync and a compressor. The plug-in also includes four 3-band EQs and modulation rate and depth controls, as well as a bit reductor for Lo-Fi effects.

The plug-in is available in VST, AU and AAX 64-bit for Mac OS X and Windows. It has an introductory price of $79 instead of $199 until October 17th, at promotions.eventide.com/ultrareverb.jsp and at authorized retailers.