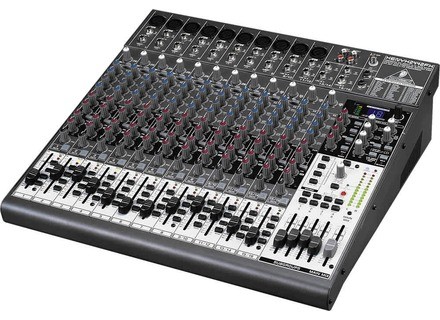 Xenyx 2442FX, Analog Mixer from Behringer in the Xenyx series.

View other reviews for this product:
I’m not a huge audio buff, but I do enjoy being able to record my own music. When I first looked into a mixer I bought a small Behringer mixer thinking I wasn’t get that much because I only paid $80, but I was wrong. The mixer was great it lasted me for two years before I decided I wanted to make a real investment in a mixing board that I could record with and do live gigs with. I looked into getting a firewire or USB interface but everything was ridiculously expensive and I got minimal XLR inputs. I then decided maybe I should just get the bigger version of the great mixer I already had. I went through with it and made a real investment in it, but it was worth every penny. Not only did I get 10 XLR inputs but I received a whole bunch of other inputs for other things. When I read the manual I also saw that I got two things I was not aware of. In addition to the great mixer I got a USB interface to improve the recording quality but I also got a whole built-in panel of effects. I tried out the effects and they were decent but they do come in handy when I want to record my drums in a small room but make them sound like their in the biggest room I can imagine. The mixer gives you tons of options. Right now, I’m looking into purchasing a power amp replace my Live PA head with this piece of fine equipment. On top of the working functions of the mixer, it’s rack mountable! It’s great to be able to get a rack and just throw this thing on it. It really does make the whole using process easy. If you’re looking for something inexpensive but built with quality and unlimited features this is the mixer for you!

Very easy and efficient
Maunal was more than helpful

See above for details
Did you find this review helpful?yesno