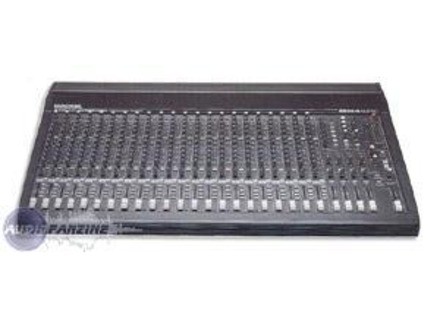 SR 24.4, Analog Mixer from Mackie in the SR series.

View other reviews for this product:
on the accuracy because I put a while to find the info: internal table changes (explained in a document Mackie; google) allows to change the routing of many things including auxiliary outputs (eg 3 pairs of the post instead of eq 2)

YUM! I had never had professional table so far, and having passed a viola L16 that there I no longer recognized my pieces! happiness! the table is difficult to saturate, when it goes into the red there is always sweet potato etc! For me it was a slap! On electribe that I branch with other synth groove box and I totally found it gave them a second life presence level!

eq does its job, shame stereo tracks do not have a semi-parametric as well (for my use would have been better) etc ... the "air" function subgroups is effective to raise the eq so musical!

Maybe I get carried away but at that price ..

I used 5/6 months back, then row for nomadism ...
What horror to connect my groove boxes then live in the sound card ..
so I can quickly make a comparison with what I know, not necessarily in the same category:

In "comparison" with audio interfaces:
When I put my electribe live in a tc Konnekt 24 D: beeeeeeerk! when I plugged in the Mackie SR24 Konnekt berk also but I have get used to it (the first time I put the hand out of the Mackie output directly on the yamaha HS80 paying attention to the VU meter ... ' javais never heard such a warmth of her home
I have a presonus studio firemobile also, it might be better but far,
a motu ultralite also, maybe it sounded not too bad too, but that was a long time ago and not with the same instruments

The particulité I like the least and that pushes me to find another solution: no direct outs ... not a problem for the live jam machine, but to compose songs quickly today or retouch improve ideas made on the flow afterwards ... erf ... if I can do I modify custody

I rather regret that there is a fixed 4 eq bands on stereo tracks, not a 2 fixed + 1 semi parametric bands
See the source
Did you find this review helpful?yesno
Cookies help us improve performance, enhance user experience and deliver our services. By using our services, you agree to our use of cookies. Find out more.