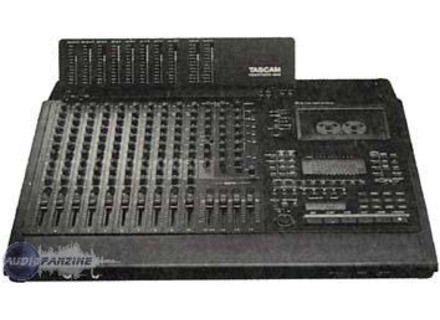 View other reviews for this product:
I have a 688 since 1993, he served me made several models.
The highlights are:
- The built-in MIDI sync (in my case, midi out of 688 around noon in the atari, track 8 which serves as a benchmark and here are the two machines perfectly synchronized! Foot!). SMPTE sync and auto sync with another 688.
- Patch Audio: without disconnecting / reconnecting any wire, you can route any input on any track recorder, ditto for the effects returns.
- 10 + 10 XLR line inputs simultaneously mixable (main mix 10 tracks: gain fader + + + pan eq acute, grave, parametric med + to 1 and 2, dual 10 tracks mix: volume + pan).
- Quality eq.
- 8 recordable tracks simultaneously.
- 8 groups with 8 + bargraph mainmix with two bar graphs.
- Output: 8 direct Recorder + 8 groups (see audio patch) + stereo + 2 + 1 and the dual (mix of additional entries)!
- Monitoring complete and independent of the recorder.
- Punch in, out automated, locators with autoplay.
- 99 scene memory patch program change by answering to the MIDI input.
- The effectiveness dbx Noise Reduction.
- Not the digital galleys.

Weak points are:
- Since the release of the machine, it is input into the digital age (more time rewind, plus audio loss when ping pong) ...
- To recommend the tapes are 60 minutes, yet the band running at double speed (9.5 cm / s), 8 tracks and occupying the entire width of the band (thus the k7 "to" single-sided), we can not exceed 15 minutes of continuous recording.
- Unlike most of today's digital multitrack, no drum machine or built-in effects.

The value for money: has the time of release 26,000 francs!
Now between 250 and 400 that is to say 2 to 3 times less than the 8-track simultaneous recording digital hardware used, thus still attractive in my eyes.

With experience, I do not regret my choice at all of the time. The sound reproduction quality is always even if time has passed. (NB: some taken from an album of Laurent Vouldzy were made at home with his 688!)
My rating reflects the fact that I do not see what you could ask for a machine that has the time of its release.
See the source
Did you find this review helpful?yesno
Cookies help us improve performance, enhance user experience and deliver our services. By using our services, you agree to our use of cookies. Find out more.