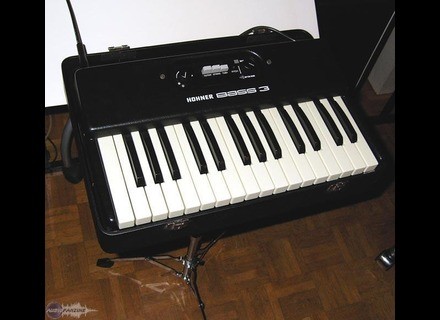 View other reviews for this product:
Ben can not be simpler.
keyboard, three buttons, two knobs, one line out and a small screw rgler pitch. and ay is. all in a black briefcase, the best flavor with a nice logo psyche ...

You plug the plug. and we play. (There are less complicated but it becomes rare). c obviously not noon, ca forces us to stretch our little fingers, occasionally c no worse ...

The bulk of the machine is: it sounds. It sounds serious (normal since ca gnre sounds low to me .. some say grouik grouik). except that you press the button and it sounds. a real dynamic, one touch ultra enjoyable play. the three presets (guitar, tuba and string), we forget the tuba (way too nasal, deserves to be filtered version trance so he could give sth). but the other 2 presets, c used directly. c ca and kills in this machine, slide in the mix and finds herself a place, a low enough at a time and presents a dynamic and discrete time, the kind of thing we spend hours on a filter other bikes ... to find the right color

I thought I had found a sub with the outcome rating SH09 (well above the 101, but that's another story c) ... well since I found my hohner, the shelf of the lower 09 ... and then attach the box, is not to say, for people who never set foot in an office It's nice to go on with!
See the source
Did you find this review helpful?yesno
Cookies help us improve performance, enhance user experience and deliver our services. By using our services, you agree to our use of cookies. Find out more.