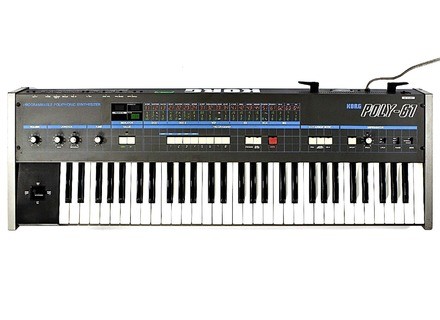 View other reviews for this product:
See among others ...

Too bad he has no knobs.
It's a little toy because of its ct plastic and painted the cover of fake digital displays.
It maintains a modern look with its sloping rear plan and shuffled gray. So even when it is pretty

Easy to use, good possibility of shipping but that makes me the same but with pots will be my god. In short, it is fitted as required for synthesis of the era.

I possde a large amount of sound bank (synths, expanders ,...), in Korg Poly 800 I had the DW6000 and II which are somewhat in the same genre. I found a lot but no more and I ended up selling them. So I hsit buy the one to try it when he used Submitted. But I do not regret it!

What diffrence. The Poly 61 has nothing to do. The sounds are excellent. The very first time that I branch and test in just the first sound, I stayed on my ass, I feel it. One of the best synths I rjouis owns and I plug it in a vintage multi-effects and tweaking sounds to see what a deal.

There is a little out of breath when you push the filter bottom (this is normal ...) and I dplore a little lack of audio quality but I could not say that this is gnral because my copy appears to be damaged. So a 9 out of 10 because of a.

Pay 65 second-hand (but somewhat damaged it would seem), I do not really regret the purchase. This synth is assurment sentence, no doubt. And as said the other, it is under-earning. Among other pseudo MODELS equivalents, there is no hsiter.

This keyboard does not pay mine (again blame the knobs replaced by commands numriques ...) but what EHJV! What a sound!
Small but tough, really.

10 because it is wonderful and 9 in the end because he can still amliorer
See the source
Did you find this review helpful?yesno
Cookies help us improve performance, enhance user experience and deliver our services. By using our services, you agree to our use of cookies. Find out more.