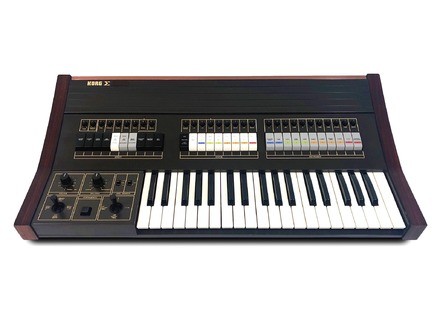 View other reviews for this product:
It&#39;s a monophonic synth with two oscillators, equipped with "push" switch to access a series of pre-selected sounds (presets), a bit like the ARP Pro Soloist. Hence the original pub presenting primarily as a stage synth, capable of a multitude of sound combinations.
In fact, these presets are arranged in two categories of sounds (since both oscillators): "synths" and "instruments", this last section is dedicated to the "imitation" of existing instruments: high wooden flute, string, bassoon, etc.. These two sections are of course mixable via a rotary control on the left of the keyboard, but you can also mix the presets of the same section of them (note: mono output or two mono for each oscillator separately).
A section called "effects" (but which are not really) can act on the octave, the LFO, multiple or single trigger (or not interesting to retrigger the envelope), playing quarter-tones or other (not really useful, because to do so you must press a note while playing on the other hand), grant (or Disagree) the oscilloscope them, and especially to adjust the sensitivity of the keyboard.
Yes, because the keyboard is pressure sensitive and can act on the LFO, pitch, filter ...
The keyboard is very sturdy, even a little "Lourdeaux" (it makes noise when playing!), But that&#39;s fine dexterity to work and make the chorus Emerson. In 20 years of use (yes!), I got very well, and I assure you that gains in precision, nothing to do with keyboards "plastoc" some Yamaha for example.
Oh, I forgot, there are two joysticks acting on the filter and modulation via LFO.
In summary, the Sigma was presented as a synthetic scene, and it is true that compared to my late MS 20, was immediately more useful for creating sounds: there are good combinations quickly to his taste will leave you more later (this is why I sold my MS 20 at the time, for the difficulty of use on stage)
In fact, I really think the Pro Soloist (in the design, not the sound) I have also, but with two oscillators (one against the Pro Soloist).

I&#39;m not objective because I&#39;m in love with this synth! Probably in part because he accompanied me for many years of creating music "rock progressivesque", and still is a friendly and loyal companion, who worked wonders, and I do not separate myself even for a huge sum! So do not try to buy it from me, it just lost.

We&#39;re here in the presence of the typical Korg. That is, it has nothing to do with a Moog, Arp or not is something else, and that&#39;s what makes it so charming.

First we must insist on the extraordinary stability of oscillators: I who have seen a few analog synths (including the Moog), I&#39;ve never seen anything like it. It is lighter, and after a few seconds, it&#39;s just, and it does not move! But if I remember correctly, the MS20 had also this advantage, to believe that the material Korg was particularly effective on it. As for temperament, it&#39;s miraculous accuracy over the entire keyboard, your electronic tuner would not return!

As for the (finally), it&#39;s great: the kind to be placed immediately in a mix, both in setting its "bold", mixed with two sections (and slightly désacordées), with its simple one solo, especially the "instrument".

In fact, there he is particularly brilliant in my humble opinion. Of course, do not the imitation of existing instruments with a synthetic analogue of the time! But it&#39;s much better actually, because the imitation will ever dream of an ordinary sample.

Thus, the flute (with its waveform simple but so warm), and especially the top timber (ah, the rectangular wave dash at will!), Are beautiful. A bit of reverb, vibrato set properly with the LFO, and it provided the thrill.

I know some might say it is far from a big sound of Minimoog, it&#39;s true actually, but who cares: it&#39;s something else I tell you! This synth a grain of its own which I am passionate about for many years, and I continue to use extensively because it is so unique that it&#39;s a little become my trademark, I proudly claim. What do you expect to synth except that it allows us to express a personal style, a "paw"?

This is what I have this little companion, I lovingly pampered!

No need to conclude, I think you understand me!

A clarification: I bought this synhé twice (yes, the first time I had to part with it to my great despair because of financial problems, and also that damned "air time" of 80 years for me posed as a nerdy eighter sixty - although I was only 15 years in 1980! - and swore by the DX7 and the Top 50!). I regretted this move just after having committed it, but luck was with me: the buyer had quickly sold (What a stupid monophonic at the dawn of the digital age), and I l &#39;I found by chance in a store of OCAS.

I bought for a pittance. So it was written that this synth would not leave me!
See the source
Did you find this review helpful?yesno
Cookies help us improve performance, enhance user experience and deliver our services. By using our services, you agree to our use of cookies. Find out more.