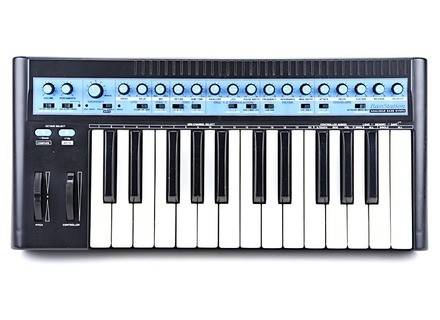 View other reviews for this product:
All the usual analoge features, 2 envelopes, 1 LFO, PW for both OSC, i have the rack version so some of the controls double up with switches to access which is normal for a modern synth although it is a bit annoying when u forget which mode a dial is in and screw up your 'perfect' envelope. As is a relatively modern synth it would be nice to have more modulation options. Oh and theres no off/on button this really pisses me off!

The manual is well written, its a pretty simple synth so i found it straight forward to use. Its dead easy to set up all the midi channels too. It does crash sometimes tho (yes i kno its an analogue synth but the interface is digitally controlled so it can still crash) but not frequenty enough for it to be a serious nusciance.

Rack box is sturdy and well built, mine is 5 years old and the only slight issue is that the power supply socket is a little bit loose.

The Bass Station sounds clean and crisp, its a monosynth with 2 oscs so its a bass/lead only synth. with square and saw waves available you can create typical analogue bass sounds, although the sound is richer than most softsynths it lacks the power of vintage analoge monosynths. Some people use bass stations as 303 emulators although the filter sound great at high resonance its still a 24/12 db filter rather than the 303's 18db filter so its not really very convincing.

Its a nice litte synth for the money, its a significant improvment over a run of the mill softsynth and does provide real analoge timbres, even if it lacks the warmth provided by its much older cousins. Its a great first hardware synth for sure. *One word of warning, the softsynth version is rubbish, it doesnt even really sound much like the real thing and is much thinner!*

Originally posted on FutureProducers.com
Posted by: Dakuan (January 1-, 2005)
Did you find this review helpful?yesno
Cookies help us improve performance, enhance user experience and deliver our services. By using our services, you agree to our use of cookies. Find out more.