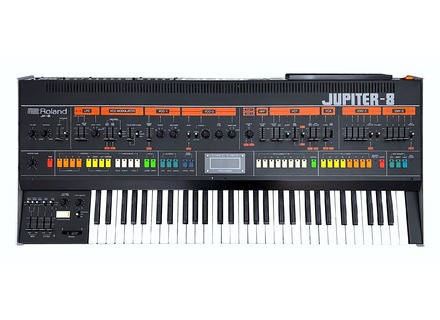 Jupiter-8, Analog Synth from Roland in the Jupiter series.

View other reviews for this product:
The TRS is a good Jupiter8 synth sounds with classic Roland can CRER with low or TB303 SH101 version but without the accents, tablecloths, mega techno sound version in 1992 and finally the beautiful sounds plthore vintage analog. But to say it quune JP8000 not recreating the same sound is wrong. Put a rack deffet numrique to Jupiter and you'll have something almost similar to JP8000 with a lot of convenience and less.
The positives are the arpeggiator, the trs rsonance good, his look, his strong compared to the plastic thingy daujourdhui. Although it is Midif lengin among the best for technoman.
As for cons dorgues sounds, sounds great to end it is almost absent subscribe
Compared a super JX10 or DX1. A you know what you want to sound like before lacheter.On often used in our pieces is visible on our site.

.
See the source
Did you find this review helpful?yesno
Cookies help us improve performance, enhance user experience and deliver our services. By using our services, you agree to our use of cookies. Find out more.