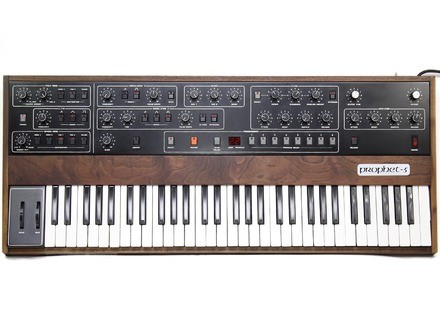 Product replaced by the Sequential Prophet-6.

View other reviews for this product:
Prophet 5 rev 3.2

Editing sounds very simple but at the same time an incredible number of combinations ... no preset that looks and as soon as you touch a knob, the sound of the preset can be reversed in 2 seconds is quite impressive, as soon as I received it, I spent hours and even days that nothing has change on one preset ...
Only downside is the manual in English ... so for those who want to decipher by A + B knobs that turn, it takes a minimum of English notion ...

For possessing a Prophet 600, OB8 and Juno 106, I can say that the Prophet 5 is by far my favorite analog.
The sound is sharp, frank and at the same time fine and dissonant. You can have both very warm and round 80s typed or very pfunk disco sounds and at the same time low current techno with a big attack and a cold, dry sound.
It is impressive the multitude of sounds that you can have with this little gem, but when we added a flanger, delay, reverb or a type of sound processing that discovers yet another multitude Sound ...
In short, it is a machine that lives, growls, which is so organic that it differentiates immediately in a mix and slice it very pronounced.

I will divide them in for anything in the world, if only for financial reasons forced me there, but I've had a few weeks and I'm already more than conquered.
When I see that some are offended by the certain price which the currently purchases (over 4000 euros), I answer that this machine was sold new in the years 4000-5000 at $ 80 (which was more than 40,000 francs to time so about 7000 euros today), and was published in 7200 single copies, so it is probably not so overvalued it ..
See the source
Did you find this review helpful?yesno
Cookies help us improve performance, enhance user experience and deliver our services. By using our services, you agree to our use of cookies. Find out more.