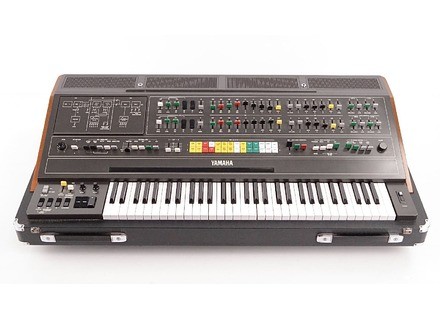 CS80, Analog Synth from Yamaha in the CS series.

View other reviews for this product:
The Yamaha CS 80 is a very big unit. I do love the way that it is laid out though with color coded sliders, I think it looks cool and kind of makes some sense of all of the stuff on the board. This board is very big though and weighs about 150 or more pounds. So there wont be any taking it anywhere. You will want to leave this in the major studio, so I don’t know why someone would want this in their home unless they just have a good space to get it in. The Yamaha CS 80 has some amazing sounds that are very thick and phat. I didn’t think that sounds on this type of gear could be so fat. They are almost to fat and need to be eq some.

Using it will take about a day or two depending on how long you sit at the unit, you will have to learn where everything is so that when you want to do something you know exactly where that slider or knob is to tweak. But with the color coded stuff it kind of makes sense of everything for you once you get the hang of it.

The sounds are by far the best thing about this unit. This has the best sounding phat sounds out of any piece of vintage gear that I have heard ever. This is the winner hands down as far as sound thickness goes. Also the ability to edit those sounds is pretty easy once you understand some basics.

This thing is huge, so don’t purchased it if you don’t have the room for it. There are two handles on it, but you probably wont be able to carry 150 plus pounds like it’s a suit case, its just too big for that.