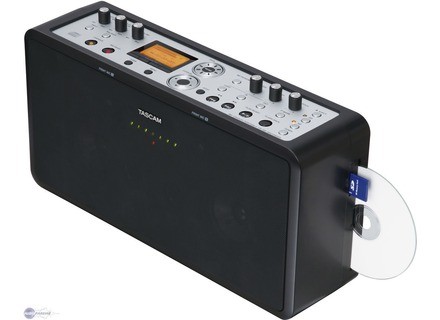 The newly-announced BB-1000 Portable CD/SD Recorder is designed to make recording to CD as simple as pressing record on a cassette 'boom box.'

The battery-powered recorder records to either SD Card media or blank CDs from four built-in microphones or XLR mic inputs. The two front and two back mics can be individually trimmed for a balanced recording, and tracks can be immediately played back through a built-in 10W sound system. The BB-1000CD has been designed for simple operation in schools, houses of worship and band rehearsal spaces.


The BB-1000CD offers uncompressed recording to CD-R/RW media for audio CDs. The SD Card can capture as WAV file or MP3 files, and SD Card recordings can be burned to CD. The recorder can use two microphones on the front of the unit, two mics on the rear, or a pair of XLR mic inputs with phantom power as the recording source. Tracks can be played through the built-in speaker system, and can be looped and slowed down without changing the pitch.

For more information, visit their web site at www.tascam.com.