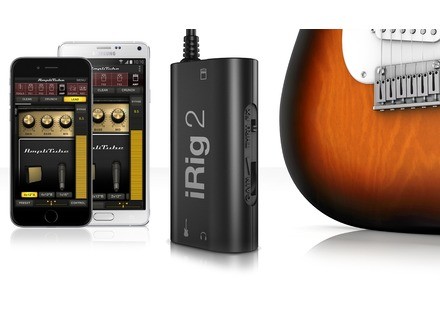 iRig 2, Audio or MIDI interface for tablet/iDevice from IK Multimedia in the iRig series.

IK Multimedia introduces the new version of its mobile interface for guitar, the iRig 2, which release is scheduled for Q1, 2015.

The first big news with the iRig 2 interface is that it will not only be compatible with iOS devices and  Mac, but also with Android tablets and smartphones (Samsung, LG, Motorola, HTC…).

Next, IK Multimedia added a thumbwheel-type input gain control and a 1/4” amp out jack, which completes the 1/8” headphone output and allows for connecting the iRig 2 directly to a guitar amp. Thanks to a 2-way switch, you can either send your favorite AmpliTube amp and effect models to your amp (FX mode) or output the analog clean sound (Thru) and use the iRig 2 as a tuner, recorder…

The new interface will ship with a removable stand and velcro strip so that you can fix it to any kind of support.

IK Multimedia will complete the iRig 2 with a suite of apps, including AmpliTube for Mac/PC, iOS and Android. Pricing announced is 29,99€ / $39.99. More info at www.ikmultimedia.com.