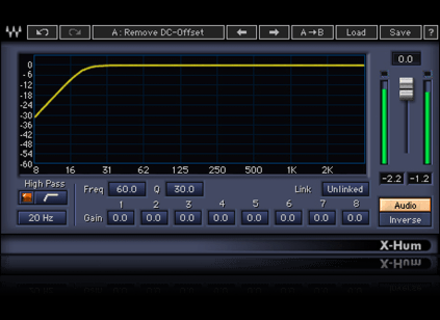 Buy this productView price information >
View other reviews for this product:
Hum can be a real pain to battle, especially with some of this older outboard gear. While ground loops can be found with proper ground lifts and whatnot, DC hum and such can be a huge pain as it usually means you'll have to rewire your entire house or potentially even move completely. X-Hum helps people that are battling hum in their recordings and just can't seem to get rid of it. It's a simple to use plugin that has some nice features packed into it. There are adjustments for the high pass filter, filter type, frequency, notch filters, q control, link controls, gain, output gain, different monitoring modes and more. To use this, simply enable it on your master buss and start tweaking. It's really that simple. I've never read the manual, but it's not really needed for a plugin as basic as this.

Waves is the king when it comes to things like stability and performance. They're almost unbeatable in this category. I've never experienced a single crash or hiccup while using this plugin inside of my favorite DAW -- Logic Pro. The plugin is cross compatible, and that means that almost every user out there should be able to utilize this plugin on their favorite machine. It also doesn't take up too much RAM or processing power, which is a huge plus. There is one issue I have experienced, however. The plugin itself is a 32 bit plugin. I run a 64 bit DAW, and it can be a real pain because Logic Pro has to run a special bridge application to utilize this inside the 64 bit workspace. I'm hoping they'll update this plugin later down the road to work in 64 bit environments natively. I've been using the Mercury bundle for about half a year now, and I'm loving every minute of it.

I've had some outboard gear in the past that would hum quite a bit, even after I fixed the ground loop that was occurring. However, due to some wiring issues in the house (or the power transformer outside), I kept getting some hum that was a huge pain to deal with. Thankfully, this plugin took care of most of that hum and helped keep the wave forms I was dealing with fairly clean. It wasn't 100% perfect, but it saved one of my mixes that would have otherwise been totally trash.
Did you find this review helpful?yesno
Cookies help us improve performance, enhance user experience and deliver our services. By using our services, you agree to our use of cookies. Find out more.