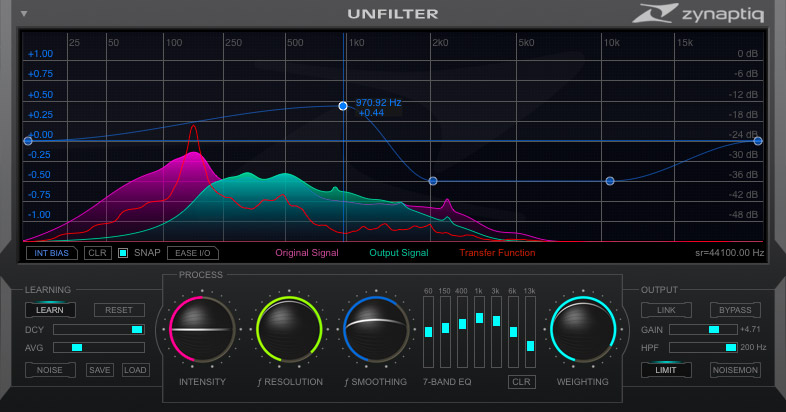 As its name implies, the purpose of Unfilter, the new product of Zynaptiq, is to eliminate all filter effects applied to an audio file. How and does it really succeed?

Digital sound and music production is a strange land. You can find all sorts of things, most of them what we would call conventional tools: between, say, the umpteenth version of a premium hardware compressor that is out of reach for the current user (unless they break a huge piggy bank), the latest emulation of a legendary synth, a different sound approach to the orchestra (but mostly sample-based), or an update adding essential functions to a DAW (which makes you wonder why they weren't included in the first place). And even if all these tools often reveal excellent in quality, with real surprises in terms of sound or design, very few of them take less beaten paths or provide a radically different function or approach.

Zynaptiq ─ a developer that established with this name only recently but has been in the business for some time now (see the Unveil and Pitchmap reviews) ─ has apparently chosen to only bring out unheard-of tools that process signals in an unfamiliar fashion, which we thought would still be out of reach for a couple of years. Polyphonic pitch processing in real time, really?

Today we'll deal with Unfilter, which is supposed to cancel the effects of filtering, be it to eliminate undesirable effects like resonances, peaks, comb filtering, etc., or simply to nullify the effect of an EQ on a signal (and apparently many other things as well). It achieves this thanks to a proprietary technique called real-time blind de-convolution that analyzes the frequency response of the filter used. Let's see what's the result. 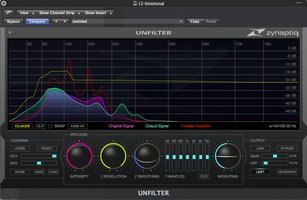 The software is available at the developer's website for 369 euros. It is certainly not cheap, but it is a highly specialized software, which unlike virtual instruments or effects targeted at a wider public, it certainly won't sell in huge numbers (how many Omnispheres has Spectrasonics sold?). Unfilter is available for Mac and PC/Windows in AU, VST 2.4, RTAS and, AAX formats. All of them, except those in Avid format, are available in 32 and 64-bit, mono/stereo and eight-channel versions. On Mac OS X, a standalone application allows to host the plug-in without the need of a DAW or editor (the same as with Unveil and Pitchmap).

Authorization is done through the application by simply sending a code over the internet. You can authorize two computers at the same time and activation/deactivation is left to the discretion of the user. You can also deactivate one temporarily to install and authorize the plug-in on another computer without the need to contact the developer. Thank you.

Thanks to the principles developed for this plug-in (which we obviously do not know in detail), the developer says that Unfilter can correct EQing automatically, get rid of issues arising due to a very aggressive EQing or filtering, apply a mastering grade EQ, force a signal to adopt the frequential characteristics of another one, better isolate and improve vocals, extract an IR to import it in another application, etc. Wow...

Let's see what makes Unfilter what it is (in terms of settings and controls). The GUI is on the same line as the other products of the brand: simple and easily readable, with its characteristic knobs and faders. Underneath the top bar where we can manage presets (including the 16 factory presets), you will see a display showing the input signal, the output signal and, after being processed by the internal algorithms, the type of filter used, its frequency response and the transfer function that allows us to "unfilter" the signal. It might seem a bit barbaric just like that, but it is actually quite transparent to the user (fortunately...). To put it in plain English, Unfilter calculates the filtering applied to the input signal (in pink) and applies a "defiltering" ("materialized" by the transfer function curve, in red). The sound resulting from this processing is the... output signal (in bright green).

There aren't too many settings, but it takes time to master them all. The first section, on the left hand side of the GUI, Learning, is crucial because the processing of the signal by the software depends on setting it correctly. To make it short: flawed analysis yields unconvincing processing. To start the analysis just click Learn. The type and duration of the signal component to be used will be defined via the Dcy and Avg controls. You can also choose to take only the non-harmonic elements into account with the Noise button (to listen to the result of the selection use the Noisemon button). For a more detailed explanation of the process, please refer to the 48-page manual where you can learn all the subtleties of the software... I don't have enough space here.

Once the analysis is finished, we have several elements at our disposal to recover the original signal or to process it in any of the different ways promised and allowed by the software. For starters, on the Process section, we have four knobs that give us access to Intensity (filtering or unfiltering rate), f Resolution (frequency resolution, which allows us to act on the resonance or roll-offs), f Smoothing (to smooth out the frequency response), and Weighting (to apply a Fletcher-Munson response, read more here). Besides these knobs, there's also a 7-band graphic EQ (that we can always ignore and use the other EQ included, which will come to in a second).

On the Output section we have a Bypass button, Link (common settings for all channels, considering that the plug-in can handle up to eight), a Limit(er at 0 dBFS), Noisemon, which we already mentioned, as well as two faders: Gain (global) and HPF (to adjust the cutoff frequency).

Last but by no means least, we have the Breakpoint Editor that works in two modes: Int Bias and EQ. In Int Bias mode you can create as many points, and the resulting curves, as desired, to apply an offset to the global Intensity setting. In EQ mode you have an EQ of unlimited bands at your disposal whose curves can be freely defined: linear, rounded, sharp, etc. (see screenshot).

Here are some examples to illustrate the possibilities of the software (you can also watch the developer's own video following the link provided below).

First a piano (virtual, but pretty realistic) that we have crushed with an EQ to create phase and transient issues, pedal noises, a nice resonance problem, and other delicacies to put some strain on Unfilter (careful, the piano files have a very low volume).

A first bounce passed through a 12 dB/oct high-pass filter at 485 Hz.

Then we have three unfiltering examples playing with the Intensity and f Resolution settings, while also applying some retouches with the EQ (the Breakpoint, not the graphic one).

Very impressing, because it doesn't just viciously increase the level of the low frequencies, but rather recreates the harmonics that had disappeared. Be careful with the Weighting because it makes the low frequency content increase.

Once again, the results are stunning. And to finish, a really flawed vocal recording just to see what we can get out of it.

After going through Unfilter. 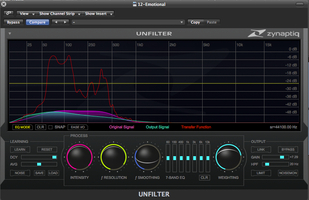 Better. We could use a Transient Designer, for example, to remove the room resonance and we would end up with a more usable track than we had in the beginning. But before you start putting words in my mouth: no, it will not make a bad recording sound like a good one. However, in times like these when we sometimes ask journalists (for example) to be sound recorders, camera (wo)men, etc., we might come across things that are even worse....

Once again the developer offers an amazing product. If the fingerprinting aspect of a filter had already been discussed during the Tone2 Rayblaster review with somewhat mixed results (but with no guarantee that both use similar techniques), this time the results are quite stunning. At the price, it must be said, of a pretty steep learning curve which requires lots of time to experiment: it is in fact very hard to find a setting for a specific processing that seems completely normal afterwards, considering that the processing is signal-dependent (just like it would make no sense to want to have presets for a compressor...). And sometimes the result is not always as perfect as we would have wished.

You can download a demo version from the developer's website and on this page is the user's manual. We also recommend you to watch this video, which shows different examples and applications than those in this review. And you can rest assured that what the video shows is authentic, I have confirmed the veracity of the examples myself.

What does Zynaptiq have in stock for us (apart from the long-awaited Unchirp, which was already showcased but hasn't been launched yet)? Whatever it is, Zynaptiq is undeniably a developer to follow due to its unique approach to creating new software tools instead of modeling or emulating EQs, compressors, synths, etc.