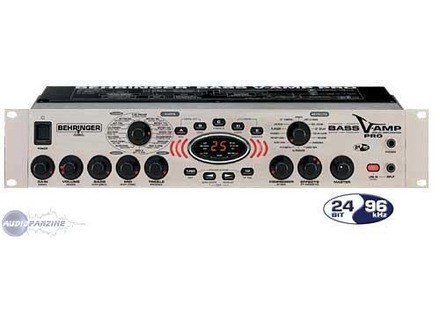 View other reviews for this product:
It's a simulator, Bass Amplifier (16 I think) acoustic amp (4) keyboard amp, Fender, Roland Marchal, Leslie, also I use the guitar and amp electric, Soldano, vox, Marchall, mesa,
it includes four simulation of pedal distortion / overdrive
a chorus, flanger, delay, loop, coompresseur, phaser, ultrabass, synth reverb, etc. ..... wha
Well after having the v amp 2 in normal, I susi offered the bass v amp, because I'm a guitarist, bassist, more and I have a Variax bass v amp has acoustic simulation
at the level of output the unit seems very complete, with sorrties XLR, digital etc. ...... I do not even know half the applications mla.
It also has MIDI input and MIDI output, which allows rajouetr a midi pedalboard fcb for example, and also to program the corny over the great piece of software free.
another feature, the v amp pro intgre a power and a button on / off
for d deifference eprix, I recommend having possd both models to the pro version, for no pedalier against or cover provided as the basic version.

Good manual behringer is a no shit as usual, it is especially damaging to behringer because the device has more possibilities than described in the record, so is better in the sense that the other EDANS because there are marks, or the leaflet promised mountains and marvels, and in fact in the Ralite the product sucks.

the editing and sound programing is very easy, only downside is the access to some parameters not accessible without connect to the PC, but hey I'm quibbling, because in fact enough to program on the PC, presets, then once live the most important parameters are available, so it's just to quibble, because that price has seen the machine, and although I consider that this product has zero defects.

it is usable as it is for those who n Eveux not take the lead, the 125 factory presets are very good, you plug it sounds

I bought this product because the v amp 2 had already closed,
good level of sound quality, nothing to say, it's just the bomb, the distal tears, we might as well play on a vintage vox, have 60 sounds that make a Soldano, and have endless sustain etc. ...... with avariax, I do not want something else, even if I had 1000000 euros, I do not see what I could buy that could suit me better than that.

in effect the sound is superb, for it seems to me against compared ^ port of effects pedals, effects of, more discreet, you can not get extreme effects, but against the quality of sound is.
the wha, seems also quite limited, but hey ,,,,,, we can have a 230 euros, the dairy, the dairy's ass, and butter

I use the v amp bass for 2 months, and before v AMP2 for 1 year
I use it in all situations, live, repeat, and enrergistrement
I plug either a PA or an amp marchal or a peavey amp, the sosna is Excellent, those who say that the sound is a rotten amp, are involved, because if you rule live well and the configuration the equalization live, and it works biej
those who say that the v amp is only for the studio, are planted, because the v amp is designed for live too.

little trick to avoid the white between the spresets, must keep the same amp and same hp, any way, I do not know much changing world of real amp in the middle of a song.

before I had a boss me30, and although the record is complete, it has 10,000 sounds, but then the sound of shit, the v amp a cot is rools

The report quality is prisx halucinant, I also bought the pedalier fcb, the integral foot, everything is controllable ,,,,,,,,

I redeemed without problem the same product
See the source
Did you find this review helpful?yesno
Cookies help us improve performance, enhance user experience and deliver our services. By using our services, you agree to our use of cookies. Find out more.