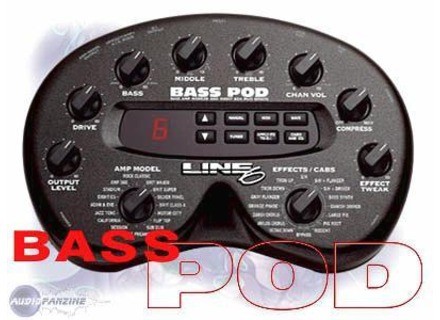 View other reviews for this product:
This is a digital amp modeling device made by Line 6 specifically for the electric bass. Line 6 achieved a lot of success with these for guitars, and this model is very similar just with none of the extra guitar stuff you wouldn't need for bass. The device has a 1/4" input, headphone out, and two 1/4" outputs. One of the outputs acts as a pre-amp/amp modeler/effects processor and the other one is a DI. So you can use this box for either function or even both if you wanted to.

Using this machine is a little difficult at first, but like most multi-effects units, it gets easier with time. The manual helps explain the device really well, it's incredibly thorough and really gives you a full explanation of how everything works. It also illustrates the possibilities that are available with this machine beautifully. The setup is also surprisingly easy to use, which makes this thing useful for people who aren't the most tech-savvy.

This was always the best amp modeling device around during its heyday. It didn't exactly NAIL the tone down perfectly, but it was probably the closest to the real thing of all the competition. Not to mention the sheer number of different amps that it could replicate pretty well. I think that it did a better job with the Mesa/Boogies than it did with the Fenders. Basically it didn't do tubes as well, but that more or less goes without saying. Overall, it could function in certain cases as the definitive tone of a recording, or it could add a nice supplement to the sound that you already have. Either way it is always useful.

I've discussed what I like about this device. The only issue I have with it now is that I'd only use it for recording, and Line 6 has already developed Amp Farm plug-in software, which does an excellent (possibly even better) job of emulating amplifiers. So I would probably have to recommend that over the Bass Pod, unless you can get it really cheaply and don't feel like buying Amp Farm. I wouldn't recommend the latter option but it is there if you need it. Overall, this is a great product that is totally reliable, it just may have been made obsolete by its own company.
Did you find this review helpful?yesno
Cookies help us improve performance, enhance user experience and deliver our services. By using our services, you agree to our use of cookies. Find out more.