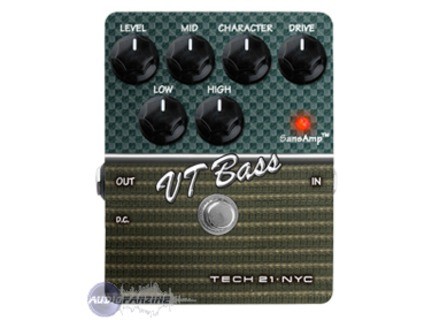 View other reviews for this product:
in fact, this pedal is a simulator ampeg amps, I mean "amp" in the plural, in fact, it is supposed to simulate several amps ampeg, B-15 and SVT next button "character" of the pedal.
Technology is an electronic analog.
was on the menu, 6 buttons; level, mid, character, drive, low and high.
input and output jack and a switch to start the effect.

I found this pedal rather simple to use, the buttons are extremely effective, and turn just with hair and the sound changes!
the manual is rather amber, it speaks of how the pedal but generally, no more examples here .... they could do better!

honestly, it's very realistic, and indeed, on this, Ed Friedland was tested here; http://www.tech21nyc.com/reviews/images/JazzTimes_CS_0808.pdf
as he says himself, it can not replicate the movement of air spewed by Bafil that comes from the front when you play in front of a real SVT 8X10 with a firm "!
but, in any case, the replica is bluffing his issue!

I bought it secondhand in March and I do not regret it ...
I use it in my cover band U2 live in PA and this is happiness!
It's incredible; when turning just the buttons, you change the sound; more treble? the sound becomes more accurate with a put ... grain! more serious? is tilted in the sub-bass! mediums, the button "character" and switch the drive you are in the area of ​​white-hot sounds when your SVT starts to take its towers; play with a pick and mount the drive and the button "character" and you will see; the sound is really "rough" at will!
I find this pedal really excellent!
turn it up and set your foot in such a way as to obtain a sound slap you fart in the eardrum in two, switch to the left slightly and you'll have the sound of flip-top B-15, switch over the sliders to the right and you will have a White SVT Drive!
you like ampeg?, you want a character?, you like rock sounds and accurate? ; Buy this pedal and you will be amazed!
all sounds really grain, and personality are accurate and impressive.
I would do this choice if I were asked, what is really the only pedal I know who has such a sound!
I recommend it without hesitation to the love of his ampeg and those who have not had the pleasure of trying this pedal.
See the source
Did you find this review helpful?yesno
Cookies help us improve performance, enhance user experience and deliver our services. By using our services, you agree to our use of cookies. Find out more.